Former Exodus International VP Jeff Buchanan has revealed more of why he stepped down from the post. While the organization said nothing about his reasons, Buchanan posted to Facebook to confirm he resigned because of his disagreement with Exodus’s new message:

For those of you who may not be aware, Angela and I have recently resigned our positions as Director of Communications and Executive Vice President of Exodus International. This was a difficult and painful decision, but one we felt we needed to make due to challenges with current messaging that reflects a theological stance we cannot align ourselves with. We leave many dear friends in the Exodus movement working on the front lines of ministry. We pray Christ’s message of hope and freedom will continue to be heard with clarity and courage.

Meanwhile, God has graciously opened a door for both of us to serve on the staff at a church in the beautiful state of Pennsylvania. We are excited about returning to pastoral ministry and serving in the context of a local church environment. We appreciate your prayers during this transition and hope that you will keep in touch in the coming years. 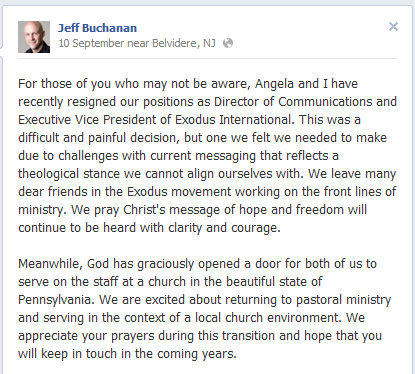 Buchanan’s promotion to the post, just over a year ago, seemed to herald a more hardline direction for Exodus, as XGW contributor Emily K noted at the time; yet it was a mere five months later that the wheels were set in motion for big change at Exodus — in a softer direction.

Just how sudden were these changes at Exodus, given that within a few months of promoting a hardcore ex-gay advocate to VP, President Alan Chambers was already signalling big branding changes to save the organization from financial ruin and social irrelevance? It seems the reversal was unexpected enough to catch even Exodus’s own VP off-guard.

It’s unlikely to be long before Buchanan aligns himself with the Restored Hope Network, the new ex-gay organization set up to counter Exodus’s rebranding.

In related news, the Restored Hope Network had its first conference this weekend — coinciding with the latest (and last?) Exodus International’s Love Won Out conference. Anti-gay theologian and biblical scholar Robert Gagnon noted publicly the scarcity of LGBT protesters at the event, but proposed an explanation that falls perfectly in line with his skewed perception of gays:

There were only 7 quiet protestors. Not much of a showing. San Francisco was having a “leather” event that no doubt was a more attractive event for those with a “gay” identity! Moral of the story: schedule the meeting during homosexual debauchery events.