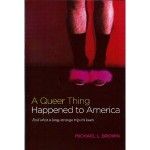 Evangelist and conservative Christian activist Dr Michael L Brown is a little disappointed but mostly deliriously excited that the publishing world was “afraid to touch” his latest book.

The back cover of his self-published tome, A Queer Thing Happened to America: And What a Long, Strange Trip It’s Been, lists blurbs by “a conservative pundit,” “a conservative publisher,” “a bestselling conservative author,” “the head of a New York City publicity firm,” “a publishing insider” and “a top literary agent” — all predicting what a flop Brown’s book would be.

To Brown, this is evidence that a gay agenda controls the media, making conservative publishers scared to publish this supposedly damning exposé of how homosexuals are destroying America, its faith and its families. Only to Brown, apparently, are blurbs like this a good thing:

FROM A BESTSELLING CONSERVATIVE AUTHOR:
“Honestly, there is no NY publisher … who will touch this manuscript.”

FROM THE HEAD OF A NEW YORK CITY PUBLICITY FIRM:
“Unfortunately [he] spoke with his team and he doesn’t have anyone willing to take on Dr. Brown’s book.”

FROM A TOP LITERARY AGENT WHO FARMED THE MANUSCRIPT OUT TO A NUMBER OF MAJOR PUBLISHERS:
“I’d be better off burning the money in my fireplace. … The economics of publishing a book like this are bleak.”

So it was that Brown was forced to publish the book himself, under his own press, EqualTime Books. The self-proclaimed “Voice of Revolution” put his publicity machine into overdrive to market the volume to an audience of fearful fundamentalists.

As I began to read this book — I’m now three chapters in — a few facts became very obvious. One is that a major aspect of Brown’s defence of his views is that he is open-minded, tolerant and loving, while gay activists are anything but.

It’s clear that in Brown’s view, love and respect are about manners. It seems, in fact, Brown thinks he can make just about any claims as long as he’s sincere and polite, and refrains from using bad language:

I engaged people with “nice civil discourse” [the words of a sarcastic critic] — so what I actually said was polite and respectful — but I was in reality a “virulent bigot” going forth “in jihad.”

And what, again, was my crime? Daring to air publicly my differences with gay activists — with respect and without name-calling, anger, or rancor — and daring to come to the conclusion that the Scriptures taught against homosexual practice.

At a news conference … I explicitly stated to the media that no hate speech would be permitted at the [Booth Playhouse] lectures. … But to repeat: We were determined to state our differences with grace and respect.

The moment I took issue with gay activism in any shape, size, or form, regardless of the graciousness of my speech, I was deemed guilty of “incendiary hate speech” and “anti-GLBT hate rhetoric.”

He speaks elsewhere of “compassion” and “unconditional love,” and is apparently bemused that in the face of such words anyone can still “push the Hate button.” Here’s the problem: They’re words, Dr Brown. Saying you are loving and tolerant doesn’t make it so. A hateful statement does not become loving because you’re “polite,” and you express it “respectfully” and with “grace.” Hate remains hate no matter what way you phrase it. If you deny the rights of LGBT persons and call for discrimination, and if you bolster your words with myths and misrepresentations (and I’ll be addressing some of those in later parts of this review), then yes, it is hate.

I had that hate for a long time as a closeted gay man and a fundamentalist Christian. A few years before I was able to come to terms with my own sexuality, I first had to come to terms with the fact I had believed and advocated harmful, homophobic views of gay men and women. I had to admit that, without realizing it, I harboured hate. “I’m sorry, but I’m dismissing you from your job because I can’t reconcile your sexuality with my Christian faith” isn’t, ultimately, much less hateful than “You’re fired, faggot.” Couch it in all the Christian niceness you can muster, but it’s still hate, conscious or not.

A major — and, frankly, risible — aspect of Brown’s argument is his reliance on internet commenters to prove that gays are graceless and intolerant while he is polite and compassionate. A significant part of of A Queer Thing is taken up with quotes from anonymous bloggers, commenters and YouTube users. In the preface to chapter two, Brown quotes the following comment, aimed at a 12-year-old boy who opposed same-sex marriage on biblical grounds:

You, just like everyone who is against gay marriage, is a mentally retarded bigot. No exceptions. Now go to hell.

The author? Wizzyboy520. Yes, an anonymous YouTuber. And the chapter is peppered with quotes from such people, often replete with very colourful language, of course. Brown seems unaware that you can’t post so much as a picture of a fluffy kitten to a site like YouTube without getting a barrage of offensive comments from anonymous users. Using the same tactics, I could construct a convincing diatribe to prove the anti-cute-pets lobby is full of hate. (I could also very easily find anonymous quotes from conservative evangelical Christians who agree with Brown and have just as impressive a command of the customary internet haterz vocabulary.)

The first plank in Brown’s defence, however, is Westboro Baptist Church pastor Fred Phelps, the notorious Kansas preacher known for the slogan “God hates fags.” As long as he can point to Phelps as an example of “real” hate, Brown can always make his own statements look moderate:

But first, let’s take a look at some real, hardcore, unabashed hate speech by none other than Rev. Fred Phelps, considered by many to be one of the foremost practitioners of hate speech in our day. Consider this representative sampling of his shocking, venomous words … This is hate speech, plain and simple, and without apology.

From here, Brown takes issue with Charlotte, NC-based activist and columnist Matt Comer, who described him as “Fred Phelps without the colorful signs.” To defend himself against this charge, Brown repeats an “apology” his Coalition of Conscience made to the Charlotte LGBT community:

We recognize that we have sometimes failed to reach out to you with grace and compassion, that we have often been insensitive to your struggles, that we have driven some of you away rather than drawn you in, that we have added to your sense of rejection. For these failings of ours, we ask you to forgive us. By God’s grace, we intend to be models of His love.

Brown is not sorry that he thinks firing us from our jobs because of who we love and share our lives with is a fine thing. He’s not apologizing for telling America that we’re a vicious and deceptive lobby secretly intent on destroying families. He’s not repenting for condemning us to everlasting punishment on account of our relationships and families. He still wants to push us back in the closet and take away the basic human rights we’ve fought long for. He’s apologizing because Christians haven’t always been polite expressing these things.

There’s always someone more extreme, more hateful to point to. Phelps is a convenient prop, since evangelical leaders like Brown are always going to use words like “love,” “grace” and “compassion” where Phelps uses “hate.” But for those whose lives are affected by it, the difference is merely rhetorical.

In the next part of this review, I’ll examine the first chapter of A Queer Thing, “The Stealth Agenda,” and asking, Is there a gay agenda?

Meanwhile, we’ve been here before with Brown. See my previous articles: The Fighting Words of Michael Brown and Pedophilia, Hedonism & Impending Confusion: Revisiting the Anti-Gay Rhetoric of Michael Brown.