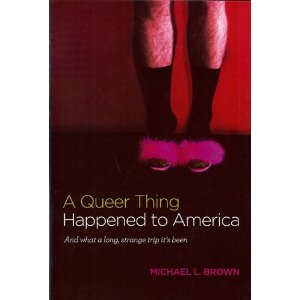 We’ve met Dr Michael L Brown before. In The Fighting Words of Michael Brown, I analyzed the revolution- and battle-based rhetoric he uses to call evangelical Christians to rise up against gays and lesbians, and their rights. In Pedophilia, Hedonism & Impending Confusion, I revisited Brown’s anti-gay rhetoric and demonstrated how he misrepresented LGBT people with a classic “slippery slope” argument.

Now Brown is in the spotlight again with a book that claims to chronicle the rise of gay rights and, with the support of “massive research and extensive interaction with the GLBT community,” debunk the so-called homosexual agenda. A Queer Thing Happened to America: And What a Long, Strange Trip It’s Been is, according to its author, a 700-page representation and demolition of the gay agenda, of which 100 pages are supporting footnotes.

Brown couldn’t find anyone to publish his book, a fact he puts down to fear. Read it and “find out why the publishing world was afraid to touch it,” he says. “Family values” apologist Bill Muehlenberg props up Brown’s theory in his enthusiastic review:

The fact that this book almost did not get published may be the most telling aspect of this volume. One publisher after another refused to have anything to do with this book. This simply shows the enormous power the militant homosexual lobby now exercises.

The simple truth is, they have effectively imposed an iron curtain of censorship, intimidating and bullying anyone who dares to question their radical agenda. Thus those voices that are willing to stand up and speak truth are few and far between.

White supremacists undoubtedly make the same claim about publishers being afraid to touch their books, but Brown and Muehlenberg, your theories of bullying might fit your story, but it’s just one version of events based on your own homophobic preconceptions. Another theory, and one supported by a story I and millions of others think better fits the facts, is that the kind of claims you make are both incorrect and fundamentally hateful. (Meanwhile, spare a thought for the kids who are really getting bullied in America today.)

Brown eventually self-published the book under the name EqualTime. If this strikes anyone as familiar, remember that anti-gay reparative therapy organization NARTH effectively had to do the same thing to get their pro-gay-cure report  published — they created a new journal and touted a feeble literature review produced by members of their own society as a pioneering, peer-reviewed study.

Brown and his supporters will probably protest that I haven’t yet read the book. I know enough of Brown, the movement he represents, and what I’ve read about the book so far to confidently predict what kind of thing it contains and how accurate it is. I’ve based my comments only on what I know so far, and I’m not building up my hopes of finding anything different in the book itself.  But I will read it — when I have the time and the stomach — and I’ll report back.