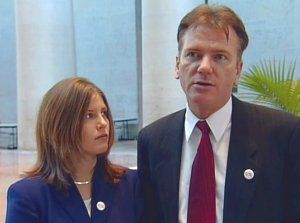 Ex-gay activist Greg Quinlan’s wife of three years, Cheryl Quinlan, appears to have received a decree of divorce in May of 2007, having filed the initial complaint seventeen months earlier.  XGW readers will recognize Greg from a recent incident involving distorted quotes attributed to noted geneticist Francis Collins.  The couple had no children and both considered themselves ex-gay before marriage.  Greg did not reply to our request for a comment.

This writer debated about whether or not to post this information.  Divorce is a painful, private time and we would not wish it on anyone, nor do we want to make things worse for Greg or Cheryl.  The inevitable pain of such events led in part to our request that Pam Ferguson (Willful Grace) write for XGW.  We hoped that she could help others recognize and steer clear of the ex-gay philosophy that holds heterosexual marriage as the ultimate proof of a successful “conversion.”  Too many have gone down that road in a mockery of what marriage means — a bitter irony when one considers that these same unions are held up by Exodus leaders “doing their part” in support of California’s (anti-marriage equality) Proposition 8.

The primary reason for us to report this, however, is that Greg and Cheryl first put their marriage into play by making it such a large part of their ex-gay activism.  Even more than most, they displayed it as proof of their claims that people can change from gay to straight.  And they used it as the basis of their platform to convince law makers to deny the rights of others. For example, in his testimony for Ohio’s version of the Defense of Marriage Act (DOMA), Greg said:

Tens of thousands of homosexuals have changed and more desire to change. Homosexuality is a behavior–not a genetic trait. Based on verifiable evidence, there is no justification for same sex marriage, civil unions, or domestic partnership legislation. None.

My wife and I are living proof–along with thousands of others–that persons with same-sex attraction can, and have, changed–and thereby can marry and be happy again.

We have chosen to follow the Manufactures’ specific guidelines for our lives. That means committed to one another as man and woman.

While they have been more apt to deny it in recent years, this is a concise reading of the ex-gay “holy grail” as relayed by so many who lived it. Greg and Cheryl made these kinds of statements publicly and often, starting with a wedding article titled “The Grander Vision of Greg and Cheryl” which juxtaposed former, evil lives of homosexual excess with God ordained nuptials.  And yet when their marriage failed it was hidden — Greg won’t acknowledge it to us even now. Instead, he appears to have moved to a different state and a different organization — business as usual minus any public mention of his ex-wife or his failed marriage.

People deserve to know that this did not work. They deserve to have a full record of events. Had their marriage remained just that, and not become an instrument through which to convince others of a flawed philosophy or a failed premise, then their divorce would not be on our radar today. But they did, and it is.

Just as with the deceptive, false quotes Greg attributed to Francis Collins overshadow the (non-existent) correction, it would appear his marriage will have received far more ink than his divorce. 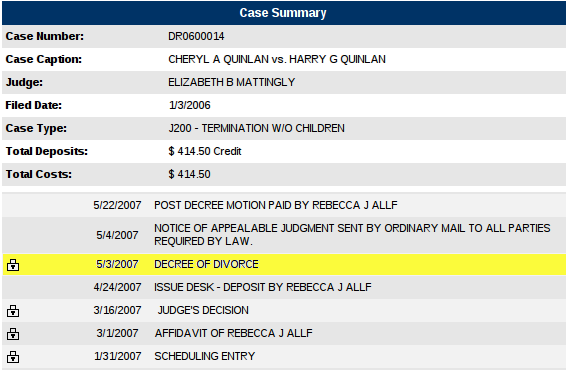 In the end, what really devalues marriage; what happened here or the legal recognition of the commitment of two people in love with each other who just happen to be of the same sex?

Also of note is the fact that Greg and Cheryl Quinlan appeared as husband and wife in the troubled and much maligned documentary by Warren Throckmorton, I Do Exist.  While we have requested for some time that Throckmorton remove the title from sale, at the very least we now call on him to note this new development concerning two of the major figures upon which that work focused.  Again, the facts should be clear before anyone considers a purchase.