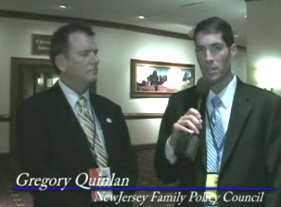 Greg Quinlan was once a prominent ex-gay activist.  He founded the Pro-Family Network in Dayton, Ohio in 1998, and appeared in I Do Exist, the ex-gay video by Warren Throckmorton, in 2004. It appears he left Ohio in the last year or so and now works with the New Jersey Family Policy Counsel in an unknown capacity.

In an interview concerning the recent coming out of contemporary Christian singer Ray Boltz, Quinlan attributed false statements to one of the nations most respected geneticists, Francis S. Collins.  Speaking to the American Family Association’s (AFA) pseudo-news site One News Now, Quinlan responded to Boltz’ contention that he had been born gay:

I’m absolutely shocked. I’ve got some of his CDs and cassette tapes –- tells you how long it’s been around. When he says he’s born that way, we know now for a fact that that’s false. In fact, just last year in March, the director of the Human Genome Project, Dr. Francis Collins, said this: homosexuality is not hardwired. There is no gay gene. We mapped the human genome. We now know there is no genetic cause for homosexuality.

The original source for Quinlan’s comments appears to be this article posted to NARTH’s website last year.  In it, NARTH President Dean Byrd quotes a few lines from the appendix of Dr. Collins’ book, The Language of God: A Scientist presents Evidence for Belief, in such a way as to make it appear that his findings support NARTH reparative doctrine — specifically, the contention that homosexuality is entirely based on nurture.

Knowing something of Collins’ character and achievements, we contacted him when the NARTH article posted last year to find out if Bryd had accurately quoted him on the subject — we suspected he had not.  We printed Collins’ response in a subsequent post, with his written permission.

It troubles me greatly to learn that anything I have written would cause anguish for you or others who are seeking answers to the basis of homosexuality. The words quoted by NARTH all come from the Appendix to my book “The Language of God” (pp. 260-263), but have been juxtaposed in a way that suggests a somewhat different conclusion that I intended. I would urge anyone who is concerned about the meaning to refer back to the original text.

The evidence we have at present strongly supports the proposition that there are hereditary factors in male homosexuality — the observation that an identical twin of a male homosexual has approximately a 20% likelihood of also being gay points to this conclusion, since that is 10 times the population incidence. But the fact that the answer is not 100% also suggests that other factors besides DNA must be involved. That certainly doesn’t imply, however, that those other undefined factors are inherently alterable.

Your note indicated that your real interest is in the truth. And this is about all that we really know. No one has yet identified an actual gene that contributes to the hereditary component (the reports about a gene on the X chromosome from the 1990s have not held up), but it is likely that such genes will be found in the next few years.

Realizing that Quinlan’s recent comments directly contradicted Collins’ clear statement to XGW on the matter, blogger Jeremy Hooper of GoodAsYou.org (G-A-Y) wrote Quinlan to ask about it.  Quinlan responded by defending his own statement, while claiming that the quote from Collins on XGW is fraudulent (Jeremy cc’d us so we could contribute to the exchange):

The quote [Quinlan’s reference to Collins] is completely accurate and the reference you make is a fraud. Your false reference cannot be independently verified or validated. Dr. Francis Collins made the statement and it is not out of context or inconsistent with his intent.

After a request for clarification from a rather stunned Jeremy, Quinlan continued:

My experience with XGW causes me to label them as a hate group. XGW disseminates propaganda not truth.

Every person has the right of self-determination. Unless you are an Ex-Gay then you do not have that right according to the behavior and actions from XGW. Human beings can chose [sic] to do what they want with the information they have regarding how they live their lives. If someone chooses to respond to the feelings of same sex attraction by living as a homosexual  they have that right. However their is little tolerance for those like me who once lived as a homosexual and have decided not to live as a homosexual.

I have received death threats, hate mail, I have been personally assaulted by homosexuals for being an ex-gay and saying so. XGW is extremely intolerant of my lifestyle choice and my public expression to the human community at large that change is possible. I have made that determination in part because there is no genetic, biological, physiological evidence for homosexuality. Lots and lots of theories but no evidence.

The matter begins with Quinlan making specious claims about genetic research and attributing them to Collins for authority.  This is similar to the way Byrd at NARTH tried to use Collins’ work to gain credibility for their theories, even though in both cases the two are at odds with each other.

Things end with Quinlan calling XGW a “hate group” that spreads propaganda and is intolerant of those who choose not to have same-sex relationships. Anyone familiar with XGW might correctly suspect that Quinlan has little first hand knowledge of us, perhaps forming those views instead through PFOX (PFOX has called XGW a hate group in the past, and Quinlan has worked with them here and there). As for that last bit, intolerance of free will and choice, apparently he hasn’t read recent comments concerning commenter Jay.

It should be noted that, while Quinlan gives lip service to the idea that people have a right to live sexually honest lives, he has devoted enormous amounts of time and effort to lobby against laws which would allow people to do just that — marriage equality, bias crime laws, and even anti-bullying statutes to name a few.  Pot meet kettle, kettle meet pot.

If the truth were a priority for him (or for that matter NARTH, which continues to post the inaccurate article), Quinlan could simply email Collins with a link to our previous post and nicely ask him to verify the quote.  However, since the veracity of our material in this matter has been called into question, we are posting the entire email exchange between this writer and Collins from last year.  My own comments were not written with public consumption in mind, so they are a bit personal but nonetheless sincere and honest.

We await, at the very least, a public correction of the erroneous statements made to One News Now, and the edit or removal of the current article and video.  Anything less will only serve to further tarnish the reputation of both Quinlan and One News Now (and by extension, the AFA).

H/T Jeremy Hooper for his follow-up and assistance.