This past weekend, Nicholas F. Benton, owner and editor of the Falls Church News-Press, attended the Falls Church Festival, in Falls Church, Virginia. As the only community newspaper, he and his reporters were there to cover the event. As it turns out, PFOX and PFLAG both had booths there.

Benton is a noted journalist, with a history as a White House correspondent during the administrations of Ronald Reagan and George H.W. Bush. He covered the pivotal Reykjavik summit between President Reagan and Soviet premier Mikhail Gorbachev held in Iceland, and founded the Falls Church News-Press in 1991. In short, he is a true professional.

Looking for a creative way to frame both sides of the issue in a photo, Benton asked a couple of women from the PFLAG table if they would hold up a sign from their exhibit in a shot of the PFOX table. The sign said “Gay is Good” in the tradition of respected, long-time gay activist Frank Kameny. After taking the photo, Benton turned to ask the man at the table for his name for the caption under the photo. According to Benton, the man, who turned out to be Greg Quinlan of Ohio Pro-Family Network, responded:

What’s the purpose of this? You’ve created an altercation here. You look like the guy who accosted us in Arlington. Do I have to call the police?

Handing Quinlan his business card, Benton then continued to explain that he was with the local paper, and would like to put Quinlan’s name under the photo when they publish. Quinlan responded by accusing Benton of creating an altercation, to which Benton responded somewhat confused, “It is a photograph, not an altercation, and it shows both sides of the issue.” 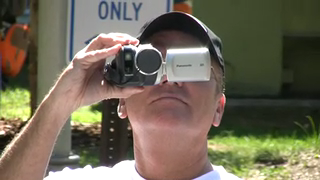 Quinlan again accused Benton of accosting him, apparently because he was speaking to him. Quinlan also decided at some point to hold a camcorder up in front of his face while talking. After Benton decided to photograph Quinlan, camcorder in face and all, Quinlan put it down and proceeded to call an unknown person to say they may have “another altercation here” or words to that effect. Because she arrived less than an hour later, we suspect the person on the other end of the phone might have been Estella Salvatierra, who was described in 2002 as a “civil rights attorney and vice president of PFOX.” Elsewhere she is listed as an employee of the FCC and has been for at least five years. Privately we are told she is the source of most of PFOX’s pseudo “civil rights” language.

Is this how PFOX altercations happen? Is this an abbreviated version of what happened at the Arlington County Fair last month? Every shred of evidence we have about that incident indicates that there was a heated argument, and possibly someone threw some literature (we are trying to confirm that part). Was this escalated into assault in the same way taking a photograph was described as “an altercation” and asking for a name “accosting”?

And we would like to ask PFOX, where was that camcorder when all this happened in Arlington? Does video exist of the incident? Why not disclose it so we can answer all these questions once and for all?

No one should ever be assaulted over a debate of issues. Then again, no one should use an accusation of assault to falsely martyr a cause. Our concerns about the possibility of either have led us to investigate the Arlington incident intensely and responsibly. To that end, we have a great deal more to report in the next day or two. Watch for that.