When I learned of the following ad from Right Wing Watch, I was immediately disgusted at the advertisers. 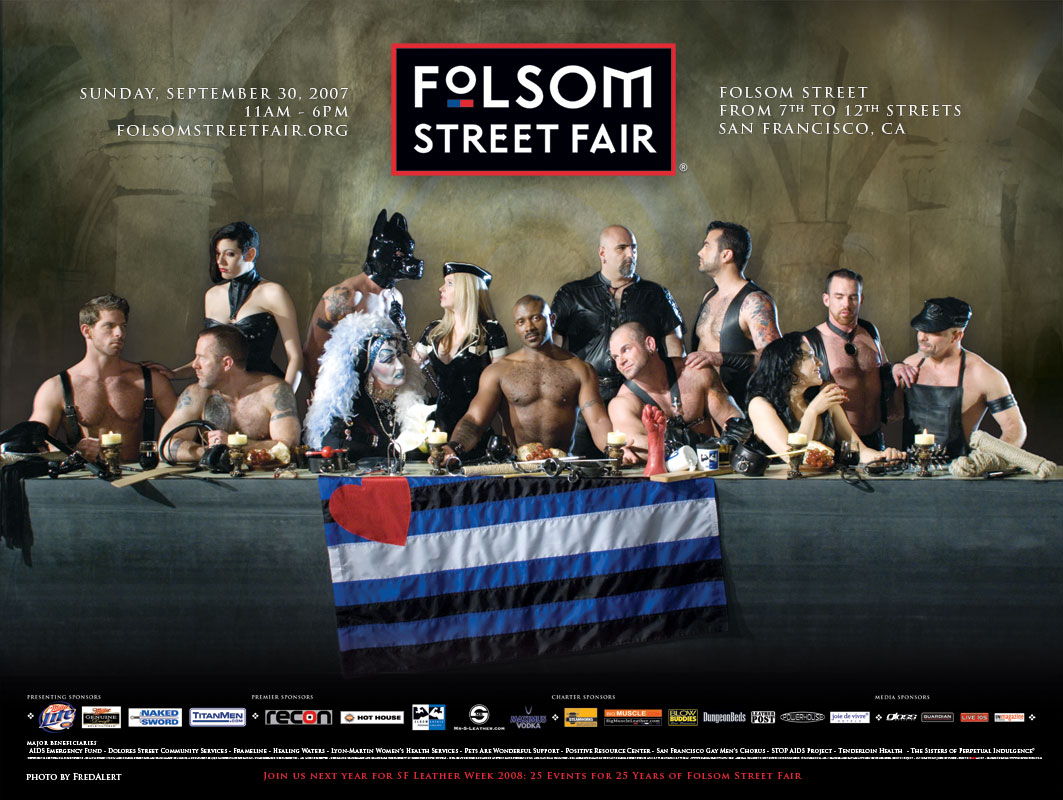 And so were two ex-gay activists.

The ad, for a San Francisco S&M fair for glbt and heterosexual people, did not target impressionable family audiences and it is apparently hard to find in print, even in San Francisco.

But no matter: It turns a cherished and peaceful religious celebration of unity and brotherhood into a carnal display of certain medically dangerous behaviors. It also portrays gay people as the antithesis of Christians — in other words, as antichrists.

While there may be a role for controversial art in society, such for-profit advertising at the expense of people of faith — including gay people — can serve no legitimate, civil, or constructive purpose. Gay people of faith can and should join others in thwarting prurient advertisers who capitalize upon the denigration of peaceful religion and brotherhood and who promote certain medically condemned activities among at-risk populations.

Unfortunately, as I will demonstrate momentarily, people like ex-gay activist Stephen Bennett apparently do not want helpful allies and they do not really want to solve problems. Like so many pro-lifers and pro-choicers, Bennett seems more interested in the cultural warfare itself, than in resolving issues or affirming shared community values.

Exodus’ Randy Thomas, on the other hand, reacted with admirable restraint — perhaps an unnecessary degree of restraint, given the severity of the offense.

But first: Stephen Bennett reacted to the offense with justifiable emotion. However, instead of channeling his anger constructively at the advertisers or seeking allies among sympathetic gay and gay-tolerant people of faith, Bennett unleashed a tirade at the “Sick Perverts in San Francisco.”

Bennett’s press release eventually addresses the issue at hand, and demands that national gay rights activists and sponsors repudiate the Folsom Street Fair — a reasonable request, in my opinion, but too late given his sweeping tirade against all gay people and especially against gay people of faith:

This is the most vile, vulgar and disgusting public display of filth I have ever seen in my life. There is no doubt a double standard when Christians and Christianity are mocked by homosexuals and degenerates in such a blatant, vile and sick way. Where is the media outrage over this event? We Christians will no longer tolerate this abuse nor be silent.

I cannot reprint all of Bennett’s comments here, as many of them are X-rated. It is sufficient to say that I’ve become accustomed to Bennett’s desperate grabs for attention from Concerned Women for America and the American Family Association. Bennett, the truth be told, has never been “silent” or “tolerant.”

However, at the ex-gay network Exodus, Randy Thomas’ reaction could not have been more different. In fact, if I may be so bold, I’d like to suggest that Thomas was unnecessarily timid. In a comment on gay journalist Chris Crain’s blog, crossposted to Thomas’ personal blog, Thomas said:

I am not sure that you are quoting scripture with your blogpost title but the full scripture I am thinking of is when Christ was being crucified and He said, “Father forgive them for they know not what they do.”

These folks knew what they were doing to some degree. They are getting all kinds of free advertising with it. Their “fair” will be even more of a deal this year and next as more people learn of it.

That said, I don’t know that they see the whole picture.

The thing is…Christ would forgive them for mocking Him if they were to see their need for forgiveness and ask. I am not offended … I expect this kind of reaction at times. Scriptures say that this type of blasphemy and hatred will happen.

I can choose to not take on offense so I don’t.

If anything I am saddened… Deeply saddened on two levels. The first being that the Atonement is full of love, selflessnes, sacrifice and resurrection that transcends beauty itself. To see it twisted this way is truly, and I say this honestly, heartbreaking.

The second level is that each person in that photo is loved by the very God being mocked. They are treasures to Him. When He looks on them He doesn’t see them defined by their proclivities… He sees each person’s soul. He knows each one of them by name and every moment of their life. How His heart must break to see them abuse and dehumanize one another in the name of sexual gratification.

So mocking the establishment of the sacraments and what they stand for is one thing…dehumanizing the precious people in the picture is another.

Some choose to be offended and have hatred toward those involved in the ad and the fair. Some on both sides will use it to fuel more of the culture war. I am not offended (by choice) but I am heartbroken (a feeling I can’t stop.)

Fair enough, Mr. Thomas. But the ad — its lewdness, its suggestions of medically dangerous acts, its inversion of the values of faith, love and self-sacrifice — are indeed offensive and should be repudiated. Chris Crain and Andrew Sullivan — two famous gay journalists — agree. And if journalist Randy Shilts were alive, I’m confident he would agree as well.

I would go further and say the fair itself should be repudiated by those people who respect religion (or public health) and who might otherwise attend a gay-themed event.