Ex-gay activists are bracing for the June 20 episode of Our America with Lisa Ling, in which survivors of ex-gay ministry abuses share their experiences on the Oprah Winfrey Network.

Some ex-gay activists will acknowledge that these survivors and their families indeed suffered long-term medical, relational, and spiritual harm caused directly by the activists’ misguided counseling methods.

But not all activists are quite ready to confront this reality. Restored Hope Network, for example, has already sought to spin the episode as a tale of archetypal unreformed godless disobedient homosexual heathens telling lies about innocent Christian believers. RHN posted the following sanctimonious warning to Facebook tonight: 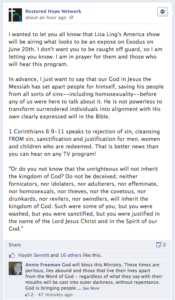 “I wanted to let you all know that Lisa Ling’s America show will be airing what looks to be an expose on Exodus on June 20th. I don’t want you to be caught off guard, so I am letting you know. I am in prayer for them and those who will hear this program.

“In advance, I just want to say that our God in Jesus the Messiah has set apart people for himself, saving his people from all sorts of sins–including homosexuality–before any of us were here to talk about it. He is not powerless to transform surrendered individuals into alignment with His own clearly expressed will in the Bible.

“1 Corinthians 6:9-11 speaks to rejection of sin, cleansing FROM sin, sanctification and justification for men, women and children who are redeemed. That is better news than you can hear on any TV program!

This sanctimony is a pious variation on that old last-resort conversational tactic of  shutting one’s ears and shouting — at God and everyone else — “I CAN’T HEAR YOU!”

I could provide any number of Bible verses against RHN here: verses that warn against deceit, hardening one’s heart, weighting the innocent with your own millstone, blackmailing God into performing a miracle, abusing people in God’s name, or projecting one’s own sins onto the person being judged.

But the Restored Hope Network is neither Biblical nor orthodox — except when it’s politically and financially convenient. So quoting the Bible to them here would be pointless.

While RHN continues to blackmail God with its threats of harm and banishment against anyone whom God doesn’t cure, it remains to be seen who among conservative Christians is willing to learn from past evangelical mistakes and avoid sinning against people going forward.