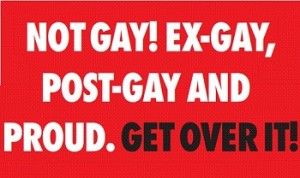 Ex-gays in the UK will go on the offensive later this month when they launch an ad campaign subverting a well-known pro-gay slogan. But its conservative Christian organizers come with a notorious reputation for promoting pseudoscience and extreme homophobia.

The words “Not gay! Ex-gay, post-gay and proud. Get over it!” will appear on the sides of London buses for two weeks, starting from Monday, April 16.

The surprisingly aggressive message spins a slogan famously used by leading British LGBT campaign group Stonewall: “Some people are gay. Get over it!”

Unfortunately for the campaign’s backers, the announcement comes just as the psychiatrist behind the most widely touted “ex-gay” study has retracted his claims that sexual orientation can change. US psychiatrist Robert Spitzer admitted this week that his 2001 research, which has been used and abused for over 10 years to support the ex-gay message, was wrong.

It also does little to commend the message that the man behind the campaign, trainee psychotherapist Mike Davidson, has recently had his membership of the British Psychodrama Association revoked. Davidson, director of ex-gay group Core Issues Trust, lost his professional credentials for offering reparative therapy, a breach of BPA policy, in turn based on the guidelines of the UK Council for Psychotherapy.

The Northern Ireland-based Core Issues is essentially a British version of NARTH, promoting the claim that homosexuals can be healed, which they say means becoming heterosexual — effectively a gay cure.

The ad campaign is jointly organized by Anglican Mainstream, whose history of ugly, homophobic propaganda Ex-Gay Watch has documented. Earlier this year, the group held a conference featuring claims of gay child-molestation and disease-spreading, with its leader, Lisa Nolland, saying that gay activists corrupted children by teaching in schools that “eating faeces” is fun.

In 2008, Anglican Mainstream — which is anything but mainstream in the Church of England, which it claims to represent — published a book accusing gay Christians of going to church only to “sleep it off and cleanse their consciences after a Saturday night spent cruising for sex at the bars,” and said the movement for gay equality was guilty of sacrificing children to a “Molech.”

The two groups have worked together before, most notably on the January 2012 conference whose title attracted controversy for referring to gays and lesbians as “the lepers among us.”

Both organizations supported Lesley Pilkington, the UK psychotherapist stripped of her professional credentials after she told an undercover journalist he was gay because of low self-esteem, suppressed memories of sexual abuse and a family history of Freemasonry.

Update: That didn’t take long. Boris Johnson — Mayor of London, Chair of Transport for London (who were to carry the ads) and a well-known Conservative — has pulled the ads. The Guardian reports:

A clearly angered Johnson said: “London is one of the most tolerant cities in the world and intolerant of intolerance. It is clearly offensive to suggest that being gay is an illness that someone recovers from and I am not prepared to have that suggestion driven around London on our buses.”