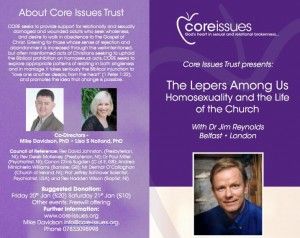 A conference taking place in Belfast, Northern Ireland, today offers ways for conservative Christian churches to minister to “the lepers among us” — namely, gays and lesbians, or those who “struggle with same-sex sins.”

Astonishingly, Core Issues, which organized it and an identical conference taking place in London, England, tomorrow [correction: next week], failed to foresee the offence the “leper” label would cause.

The conference organisers recognise that the event’s title “The Lepers Among Us” has caused some misunderstanding, being taken as a call for the church to treat LGBT people in the way that lepers were treated by society in biblical times – shunned and regarded as untouchable. In fact the intention is the opposite. This conference criticises the church for behaving in this very way – treating LGBT people as “outcasts” – and calls upon it to help end prejudice wherever it is found, especially within the church.

So what can we expect of a conference organized by Core Issues? Their dubious choice of speakers in the past, including Lesley Pilkington, David Pickup and Arthur “Abba” Goldberg, of JONAH, shows a strong identification with the type of anti-gay, ex-gay conservatism promoted by NARTH in the US.

Core Issues Trust’s claim that it does not offer conversion therapy is somewhat disingenuous, for while it doesn’t directly offer therapy at all, it clearly stands for the NARTH approach. The homepage currently links directly to an article by David Pickup promoting “authentic reparative therapy” and decrying Exodus International for rejecting it. To support its claim that gay orientation is unnatural, the Core Issues website links approvingly to a PFOX article labelling homosexuality a “public health crisis” and citing the discredited “gays die at 41” claim. The science section of its websites offers links to articles by Neil Whitehead and Jeffrey Satinover, both of NARTH. The latter is a Core Issues board member.

Core Issues promotes a “compassionate” approach to the “same-sex attracted,” but ultimately its message to gay Christians is that they need healing, and it is clear that by “healing,” they mean healing NARTH-style:

There is a growing body of research evidence indicating that sexual preference is neither immutable, innate nor chosen. As a consequence of our basic sinfulness we all have desires that we do not choose to have but we do have choices with respect to what we do about them. As a consequence our sexual identity can be reinforced or altered by either gender-affirming or gay-affirming lifestyles or therapies. CORE works with people who voluntarily seek to change from a “gay” lifestyle to a gender-affirming one. This is sometimes referred to as a “sexual re-orientation” process.

Merely abstaining from homosexual activity, although admirable, cannot be regarded as healing. Heterosexual preference is the goal of gender-affirming therapy and this may lead to marriage. However there will always be those who choose to remain celibate and single. Such singleness should be valued and respected.