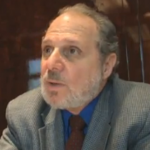 Arthur Goldberg, the ex-gay leader exposed earlier this year as a convicted Wall Street felon, will speak at a conference in Northern Ireland in November.

Arthur Abba Goldberg was jailed in 1989 after being convicted of fraud. He later founded JONAH, the Jewish ex-gay ministry originally known as Jews Offering New Alternatives to Homosexuality, but whose recent name change made it the confusing Jews Offering New Alternatives to Healing. Goldberg appears to have deliberately hidden his identity, and stepped down from the highly anti-gay NARTH when the story became public in February. He subsequently blamed everyone but himself for the fiasco.

Evidently none of this has affected his standing among some conservative evangelicals, including the Northern-Ireland-based Core Issues, who have made him their main speaker at a November 1 event named for Goldberg’s anti-gay, ex-gay polemic Light in the Closet: Homosexuality and the Power to Change. (Actually, the book had the word “Torah” in the title, too.)

Goldberg will be joined by “gender wholeness” counselor Baxter Peffer, erroneously referred to as Baxter “Beffer” on the Core Issues website.

Core Issues joined Goldberg in hitting the headlines in February when gay activists criticized it for hosting a conference by Mario Bergner, an ex-gay Anglican priest who claims to have been miraculously healed of the “symptoms” of AIDS.