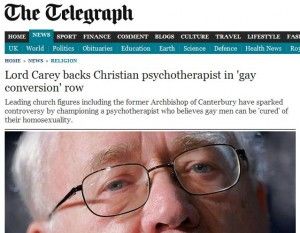 A number of British conservative evangelical leaders have written to the Daily Telegraph to express their support for Lesley Pilkington, the Christian therapist found guilty of professional malpractice for offering a “gay cure” to an undercover journalist.

Lord Carey, the former Archbishop of Canterbury, is among the 70 signatories of the letter. Also joining him are the former Bishop of Rochester Michael Nazir-Ali, the current Bishop of Chester the Right Reverend Peter Forster, the Old Testament scholar Gordon Wenham — and several names representing the most extreme end of the anti-gay, ex-gay movement in the US. They include JONAH’s Arthur “Abba” Goldberg, PFOX’s Regina Griggs, and David Pickup, Jeffrey Satinover, Julie Hamilton and Benjamin Kaufman of NARTH.

To defend the practice of gay-to-straight reparative therapy, the signatories rattle off the names of Joseph Nicolosi, Dean Byrd, Robert Spitzer, and Jones and Yarhouse, apparently ignorant of just how limited — and sometimes outright misleading — the scope and results of such research have proved.

But Carey et al have also glossed over the reasons why Lesley Pilkington was banned from practising psychotherapy in the UK. That she offered to help journalist Patrick Chapman to change his sexual orientation is almost beside the point — she insisted, despite his denials, that the roots of his homosexuality were in low self-esteem, (non-existent) childhood sexual abuse and (also non-existent) a family history of freemasonry. Lesley Pilkington was guilty of sheer quackery.

It’s no surprise that Lisa Nolland and Chris Sugden of the ultra-homophobic Anglican Mainstream would support Pilkington. But that leading Church of England evangelicals such as Lord Carey and Bishop Michael Nazir Ali would not only support her but throw their weight behind the anti-gay pseudoscience of NARTH is indefensible.

[Edited to reflect the fact that Michael Nazir-Ali is the former Bishop of Rochester.]