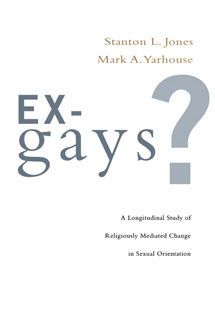 A 2007 study of sexual orientation change is back in the news following its publication in a scientific journal. But despite conservative Christians’ championing of the research as proof that gays can change, the article presents nothing new.

Stanton L Jones of Wheaton College, IL, and Mark Yarhouse of Regent University, VA, followed 61 subjects over about seven years of ex-gay therapy to assess whether homosexuals could change.  It was published by Inter-Varsity Press in 2007 as Ex-Gays? A Longitudinal Study of Religiously Mediated Change in Sexual Orientation.

Interested readers can revisit Dr Patrick Chapman’s three-part review of the study to see clearly why it fails — there’s no need to rehearse the flaws again, because what’s presented in the Journal of Sex and Marital Therapy (Volume 37) is essentially the same. Its negligible results offer little hope for gay Christians who want to do anything more than change their behaviour

The conservative Christian LifeSiteNews.com has already latched onto this old news with the grossly misleading headline “Major Study: Changing Sexual Orientation Is Possible,” but even the authors’ own press release downplays this claim:

In short, the results do not prove that categorical change in sexual orientation is possible for everyone or anyone, but rather that meaningful shifts along a continuum that constitute real changes appear possible for some.

To bolster its optimism, LifeSiteNews.com also throws in mention of NARTH’s 2009 report on sexual orientation change, a mere literature review falsely touted as a new milestone study. Robert Spitzer also gets a nod for his 2003 study, which has been used to prop up an ex-gay, anti-gay message, but the article fails to mention he has since denounced conservative abuses of his findings and says orientation change is rare.

An increasingly desperate Christian Right will try to milk this latest publication for all its worth, but don’t be fooled: Same study, same results, same flaws.

Update: Warren Throckmorton reminds us to mention Mark Yarhouse’s other recent study, which demonstrated that “ex-gay” men in mixed-orientation marriages change their behaviour but not their sexual orientation. Ex-Gay Watch also commented on this here.