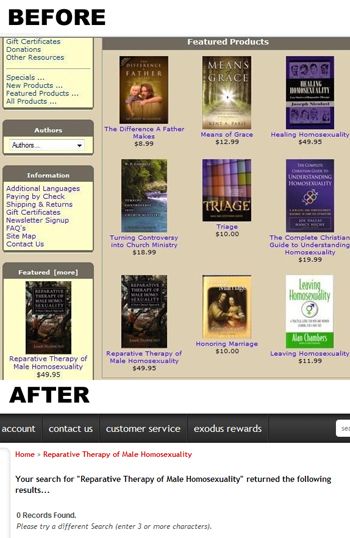 Exodus International has relaunched its online bookstore at Exodusbooks.org, but some key titles are missing from the shelves.

In particular, there appear to be no books by the notorious Dr Joseph Nicolosi, the father of ex-gay reparative therapy and former president of the National Association for the Research and Therapy of Homosexuality.

Nicolosi’s seminal work Reparative Therapy of Male Homosexuality (1992), in which he articulated his view that distant fathers and overbearing mothers cause homosexuality, is no longer listed. Also missing are Nicolosi’s A Parent’s Guide to Preventing Homosexuality and NARTH’s Handbook of Therapy for Unwanted Homosexual Attractions, although I can’t confirm if those two were previously in the catalogue.

So is it an oversight, or has Exodus made a conscious decision to disassociate from NARTH and its promise of a gay cure through psychiatry? If the latter, I can’t help but note that Exodus chief Alan Chambers has harsh words for apostates who try to distance themselves from his own organization.

Anyone notice any other glaring omissions from Exodus’s new bookstore?