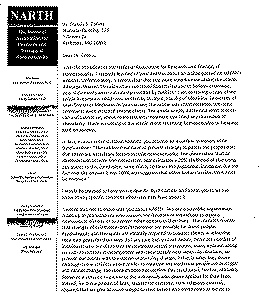 In 2007, the National Association for the Research and Therapy of Homosexuality (NARTH) posted an article by Dean Byrd on their website.  It seemed written to give the impression that noted geneticist Dr. Francis Collins agreed with both the idea that homosexuality did not have a genetic cause and that it could be changed or prevented.  To be sure, NARTH believes all this, but it did not sound like something with which Dr. Collins would agree.  Collins has a reputation for being a brilliant and reasonable scientist, passionate about the truth.

A careful reading of Byrd’s article revealed some select comments from Collin’s book conflated with Byrd’s pontifications and information from other sources.  We decided it best to contact Collins with our concerns to find out what he really thought.  All this along with Collins’ response is detailed in our subsequent post where Collins essentially agreed with our assessment and then some (read the article for details).

Since then, we have had to recall, re-emphasize and defend that exchange as various groups and individuals repeated the distorted notion of Byrd’s article.  Collins was contacted again and reconfirmed his original position.  Then early this year NARTH resurrected the issue after receiving copies of this writer’s email exchanges with Collins via a Freedom of Information Act (FOIA) request.  While they claimed they had made the request themselves, we now know that the information was forwarded to them from the anti-gay Citizens for a Responsible Curriculum who had made the original FOIA request.

In their most recent post, NARTH accused this writer of flattering Collins with “adulation and praise,” and misrepresenting NARTH and Byrd’s article. They announced their discovery of the email exchange as a find, even though the entire thing has been posted on XGW since 2008 for all to see.  Read our response to this if you care to get up to speed on the matter.

We decided to take a page from their book and request any correspondence between NARTH and Collins.  In response, we received a copy of a letter (PDF) sent to him by NARTH President Julie Hamilton sometime after they received the FOIA material from CRC.  In it, Collins is treated more like a doddering old man than the head of the National Institutes of Health (NIH).  Even though we sent a link to the original article with our email to Collins, and it is clear from his reply that he read it, Hamilton encloses a copy noting “Although Warren Throckmorton [see this post to see where he comes in] and David Roberts led you to believe otherwise, your statements were not misrepresented by NARTH.”  No, Dr. Collins, regardless of what you think, you do agree with us — sheer arrogance.

Hamilton continues to reassure Collins that what he said he saw in the article is not there.  One can almost visualize her speaking slowly to help him understand, the supposition being that if Collins didn’t agree with NARTH, he must certainly have just not understood.  There seems no way for them to comprehend that he really does think they misrepresented him.  Hamilton goes on to lecture Collins in the NARTH mantra of change, trying to plead the case that NARTH is a professional organization and not at all anti-gay.

At the end, Hamilton does what she accused yours truly of, she flatters Collins with her own brand of adulation and praise:

I hope you receive this letter with the sincerity with which it was written.  Your book, The Language of God, has brought joy to many religious professionals, demonstrating that science and faith tradition are not inherently incompatible.  As an evangelical Christian, I testify to God’s love, and it is His love that many of us who provide professional care to those who are distressed by unwanted homosexual attractions find central to our motivation to help.

It should be noted that our FOIA request parameters were broad and yet no reply from Collins to NARTH was included.  In other words, while Collins responded not once but three times to our requests, he did not reply to NARTH’s one and only letter.  That says a lot.