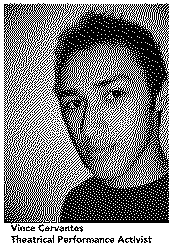 When Vince Cervantes began to notice his strong attractions to other men in his first year of college, he immediately panicked. At that time he was a student at Azusa Pacific University, a Christian school that taught that homosexuality was immoral. The only thing that made sense to Vince was to enter into ex-gay therapy, and he did so, with an Exodus-trained counselor at an Assemblies of God church. Otherwise, he feared, he would be kicked out of school, disowned by his parents, and worst of all, end up in Hell. His therapist told him to give up activities he loved, like musical performance. He complied, believing this would help him go straight.

After going so far as to consent to exorcism, Vince realized nothing was making a difference — he wasn’t going to change. At first depressed over this, Vince came to an “epiphany” that caused him to look at homosexuality and the Bible from a different perspective. He realized God was going to love him no matter what. “I knew that as a Christian I am taught that I can’t bear false witness, and to say that I wasn’t gay, meant that I was denying something that God made a part of me.” His parents had to take some time to “get used to” Vince’s decision to be true to himself, but they were able to eventually fully accept him.

Vince comes from a Latino family – his mother’s family is from Spain and his father’s from Mexico. His sexual orientation creates friction in a culture that tends to embrace the ideology of “machismo” or manliness. “There is a constant pressure in Latin culture to prove oneself. Men are taught to take pride in being a man, and to not be afraid to flex their masculinity,” he says. “Since there is a misconception that one man has to ‘submit’ to another man in order to be a gay couple, Latin communities tend to push away gay men. According to traditional standards, men are always to be dominant and never ‘lessen’ themselves. If a man calls another man a ‘sissy’ in Spanish or a girl, those are typically fighting words.”

While growing up, there was also a constant pressure to prove himself to his father. Vince pushed himself into “gender-normal” activities like playing sports, even though he might really want to be playing dress-up.

Latino families tend to be devout Christians, and what is taught in the church defines the morality of the culture. But they differ from culture to culture as to how accepting they are. “Many Mexican families in America tend to remain very traditional on all levels. They are typically Christian homes (primarily Catholic) that maintain a view that homosexuality is sinful,” Vince explains. “That causes so much censorship and lack of discussion about issues, that it makes it difficult to bring in new perspectives.” Spaniards, on the other hand, are diverse in their opinions – there are very traditional conservative Spaniards, and there are more progressive Spaniards. “With gay marriage being legal in Spain, many Spaniards have opened up more to the idea of same-gender couples.”

While opposition is likely to be met, coming out to a Latino family has its advantages. “With immediate family, there is an unspoken obligation that we are always to love each other and always be there for each other, because that’s what families do,” says Vince. Although, sometimes that closeness can work against you; “Because families tell each other everything in Latino culture (stereotypical, but true), one could expect others to find out quickly. I personally came out to one of my cousins and within a week my entire extended family knew.”

Lesbian Latina women have different obstacles when coming out. “They are often pushed into masculine roles because that’s the presumption that they have of lesbians — they become just one of the guys.” Men are much more accepting than straight women of lesbians. “Straight Latina women really tend to have some hostility towards butch lesbians.”

Because of its ambivalence over acceptance of LGBTQ persons, the Latino community has a pervasive “down-low” culture, which Vince has encountered with more “cholo” (“gangster”) Latino guys. Men may cheat on their wives or girlfriends with other men in secret. Vince thinks that women in some of these cases may know, but “because of their belief in a traditional marriage and their role as women, they don’t say anything out of fear, fear of what that means for them as women.” This “down-low” culture is dangerous in that cheating men will spread STDs – including HIV – to their unsuspecting female lovers. People of color account for most new reported HIV cases in the United States.

Education is key. The more people see for themselves that gays and lesbians are just like any other human beings, the more tolerant and accepting they will be of people with different orientations. “There needs to a lot more Spanish language resources, blogs, articles, and speakers that are bringing a new message out there,” Vince says, and spreads that “new message” with two blogs – one in English and one in Spanish. And even though homosexuals might meet intolerance with many in the Latino community, Vince says there is hope. “If people are willing to commit to having the conversations necessary to make differences in hearts and minds.”