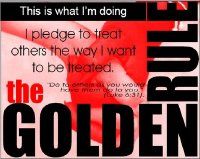 Now, Dr. Warren Throckmorton, professor of psychology at Grove City College, and author of the Sexual Identity Therapy Framework has come up with The Golden Rule Initiative. Dr. Throckmorton’s aim is to provide an appropriate response for straight, evangelical students to the GLSEN sponsored Day of Silence on April 25.

The Day of Silence began 12 years ago with the purpose of proactively bringing attention to anti-LGBT name-calling, bullying, and harassment on high school campuses. GLSEN’s DOS has increased in participation and exposure each year since its inception, but opposition remains from “christians”, some of whom refuse to allow their children to attend school on that day.

Day of Silence participants are most notably opposed by the ADF sponsored Day of Truth which occurs on April 28 and was established 4 years ago to “counter the promotion of the homosexual agenda and express an opposing viewpoint from a Christian perspective”. It reminds me of one of those “loving” and “compassionate” Sally Kern rallies.

While Dr. Throckmorton may have the best of intentions with the Golden Rule Initiative, he’s getting mixed reviews from all sides. He says…

Although we are being criticized by some on both extremes, I believe the Golden Rule Initiative is an effort to affirm consensus in attitude and action that schools should be safe places to learn for all students. We all should agree that bullying and harassment of GLBT students is wrong. The Golden Rule group is making a stand on that common ground.

I believe there’s merit to Dr. Throckmorton’s idea. Now, lest you begin rotting your tomatoes to toss my way, hear me out on this. I grew up in an anti-gay, evangelical home. It took years for me to understand the depth of the bigotry because it was couched in scripture, dowsed in guilt, and lit up with the flames of charismatic fundamentalism. I was not as clear-thinking and transparent in my youth as some in the amazing crop of young people I’ve had the privilege of befriending. For me, it would have been a blessing to have been offered a viable alternative for responding to my GLBT peers, and I would have loved to have been given “permission” to participate in a way that might result in making friends with the kids I’d been taught to hate and fear. It would have been a step forward for a young person in my shoes.

I understand that many view the Golden Rule Initiative as a distraction from the very important and vital message of The Day of Silence. And I agree that the GRI is not the ultimate goal, merely a step forward. Having spent countless hours with today’s youth, I believe the GRI could begin a dialog resulting in students having the courage to step forward and treat their GLBT peers as they want to be treated by remaining silent with them for possibly the remainder of the day or on the DOS next year. Recognizing that I’m at times a bit naive and idealistic, I still honestly believe it could happen.

Ultimately, the Golden Rule Initiative, as a response for straight evangelical students to the Day Of Silence, will be as meaningful as the individual students participating make it. There is no place for arrogance or condemnation in this discussion, and that frame of mind should begin with all Christians, be they gay or straight.

Note: These views are mine and do not necessarily reflect the views of the other writers at Ex-Gay Watch.