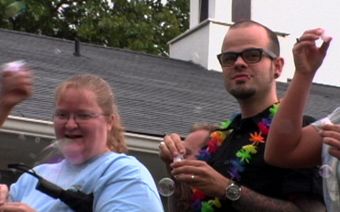 A year and a half ago we reported that Jay Bakker, the son of Jim and Tammy Faye, had been deleted from the speaker schedule at the 2005 Exodus Freedom Conference. The reasons for the cancellation may have something to do with an interview he gave to gay new source QNotes about the conference in which he says:

“I think what the church has done to the gay community is horrible and wrong,” he said with a start. “My family went through so much hurt and rejection from the church. I wanna’ go back and show them how hurtful they’ve been.

“I would never tell anyone that they have to change their sexual orientation or they’re going to hell. I just want to tell them that God loves them. I know I serve a loving and compassionate God — but I don’t think the gay community has been shown that.”

That view of God’s grace does not mesh well with Exodus’ “truth in love” that identifying as gay is sinful. But though Jay was dumped, Exodus did keep Jerry Falwell.

Jay Bakker has a new church he has started, called Revolution, which meets in a bar and ministers to the tattooed and pierced segment of the population. The Sundance Channel is running a new reality show documenting Jay and his church called One Punk Under God.

I got a chance to see the first episode and, well, it really wasn’t compelling reality television. For one thing, Jay seems nice rather than edgy and it looks like no one is going to get drunk and fight or throw anyone else off the island.

But it did document a sincere and devout man who was deeply hurt by the trauma of his childhood and who now wants to bring God’s grace to those who have been rejected by religion. (I especially liked that his notebook he uses when on speaking engagement is adorned with one of his church’s stickers that says “Equal Rights is a Moral Issue”). One can’t help but think that Jesus would have been more comfortable in Jay’s church than he would in Jerry Falwell’s.

Next Wednesday, Jay will be facing the consequences of what happens when a young struggling Christian preacher decides that he is called to support and defend gay Christians (previews suggest it isn’t pleasant). I plan on tuning in to see if Jay discusses Exodus and his removal from their roster.