We got to the protest site (at Southwest Community Church) around 6:45 since check-in for Love Won Out began at 7 a.m. We were there for about half an hour before two buses organized by the Unity Rally arrived. The Unity Rally was a coalition of liberal political, social and gay rights groups formed to provide a uniform voice in response to Love Won Out. Ex-Gay Watch ultimately decided to speak in our own voice and remain unaffiliated with the Unity Rally coalition. We planted ourselves firmly on the curb by the church’s main driveway and each person was given a sign they had picked the slogan for. Before the Unity Rally buses arrived several other small groups of private individuals arrived. 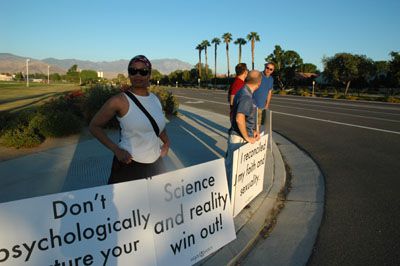 7 a.m. Rise and shine: Waiting to welcome conferees and protesters.

Daniel’s account and photo gallery continue after the jump…

It’s interesting that when the protest group was still small was the only time anyone from the church came out to talk. A middle-aged woman with adorable short blond hair came out to see what we were all about and had a delightful, honest and civil talk with XGW author Timothy Kincaid for a few minutes. Once the Unity Rally bus protesters arrived one of the organizers gave instructions (via megaphone) to her protesters they were forbidden from engaging church members in any sort of dialogue as to prevent from being drawn in or entrapped into an uncivil argument by some evil nasty conference attendee. This was particularly disturbing since from first hand experience at the Dallas protest and now Palm Springs, I’ve found every single time someone walks from the church out to chat with protesters they are polite, friendly, civil and honestly want to talk. Unfortunately the short-haired woman was the only person to come out and chat the entire morning. It’s just a guess but perhaps once the two buses unloaded our numbers simply appeared too intimidating. From that point on we just got yelled at a couple times from cars but could never really understand what anyone was saying. 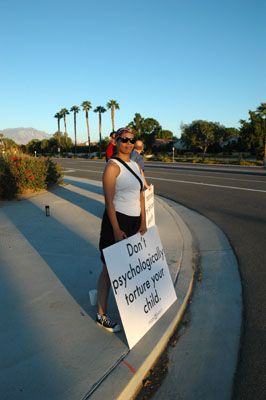 Also I’d like to thank everyone who sent in questions for my press release which I gave to every member of the media I could find. Unfortunately since I would like to keep those questions a surprise, I’m not going to post the finished press release. I’d also like to thank a donor who bought all the foamcore board used to make my signs. Lastly, I didn’t know I had something white on my lens until I got home on Sunday. 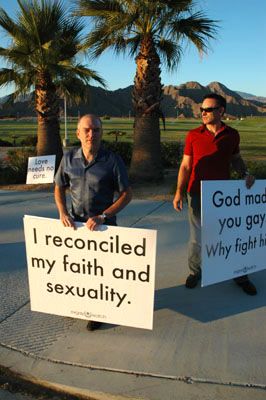 Jim Burroway of boxturtlebulletin.com on the left and XGW author Timothy Kincaid on the right 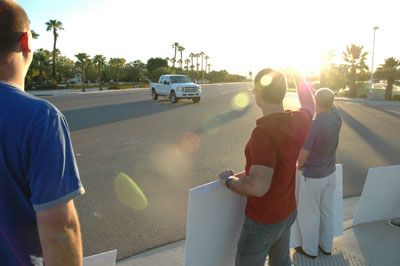 To maintain a friendly, light-hearted, and non-threatening atmosphere we greeted each car with waves and called out “good morning.” I’d say most people either smiled or waved back. That’s XGW reader Scott H’s head on the left.

I laid out our 36″ x 42″ signs in Adobe Illustrator and took them to an architectural reprographics company to be printed on what amounts to a laser printer for blueprints for only $5 per sheet. Then I glued/taped the giant printouts to foamcore board (of the same size) bought at any art supply store. Total cost per sign, $13 bucks. I rock. Here are slogans on our signs:

Caution: Junk science ahead!
Science and reality win out!
Love needs no cure.
Don’t psychologicallly torture your child.
There’s no truth or love in Focus’ lies about me and my family.
I reconciled my faith and sexuality.
You are the parent of a gay Christian.
God made you gay. Why fight him? 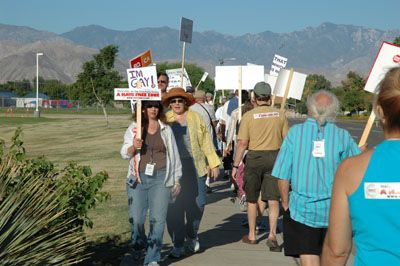 When the Unity Rally buses arrived those protesters were instructed to march in a loop up and down the sidewalk since their organizer had concerns about being cited for loitering or something. I was never really clear on their exact concern and so our group stayed firmly planted on the curb in prime view forcing the bus protesters to march behind us. I chatted with a sheriff watching the event who had no problem with us standing in one place and simply wanted to know how long we planned on protesting. 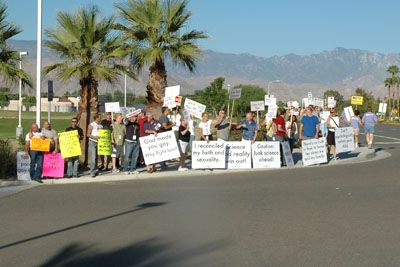 Here’s the XGW group along the curb with the Unity Rally marchers behind us. There were just as many people on the other side of the driveway where I took the photo from. 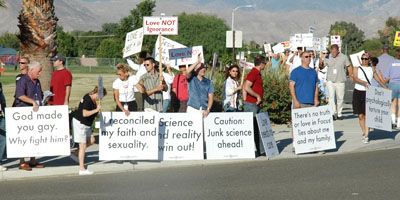 The two signs on the far left were extras I brought and were grabbed by bus riders who joined us on curb. 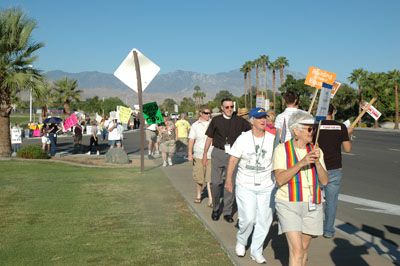 Here are some people on the other side of the driveway. 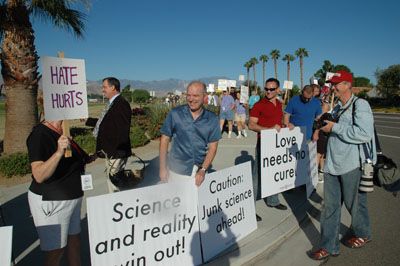 That’s Michael Bussee (one of the founders of Exodus) in the back in a black blazer carrying a basket of olive branches. 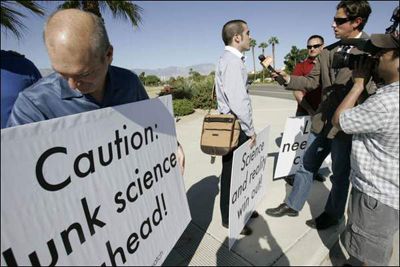 The Desert Sun took this photo of me talking to KTLA. (Desert Sun link)

Fast forward to 11:00 that morning for the actual Unity Rally event held in a park in central Palm Springs. Before the rally began several groups had information tables set up. Here’s Michael Bussee again. 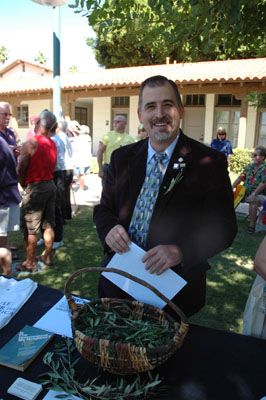 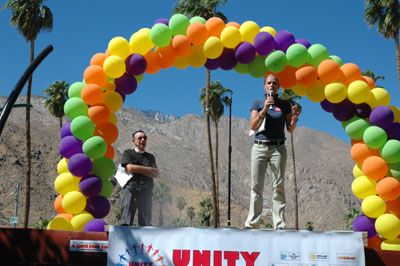 The graphic below was used in virtually all Unity Rally materials.

Based on the Unity Rally’s website and literature distributed around town I was concerned by their frequent use of the word “hate.” My concerns were confirmed at the rally where two common buzz words worked into almost every speech were “hate” (used in connection with Focus) and “unity” (used in connection with gay folk). Most speakers had limited knowledge of ex-gay issues since most speakers were politicians or representatives of local gay and liberal political groups. However the rally organizers took great pride in their event being a local effort. Focus/Exodus/NARTH were continuously and vaguely accused of spreading hate, hating, creating hate and so forth by speaker after speaker… UNTIL the Rev. Nick Warner of the Desert Oasis Chapel got up had the balls to say something to the effect of “the people attending Love Won Out do not hate you” and that they were just misguided about gay people. The rally crowd seemed stunned by Warner’s radical message and several times during his speech our group from XGW had to start the crowd applauding. Bravo to you Rev. Warner for being informed about ex-gay issues and not going along with the party line and making accusations of “hate.” 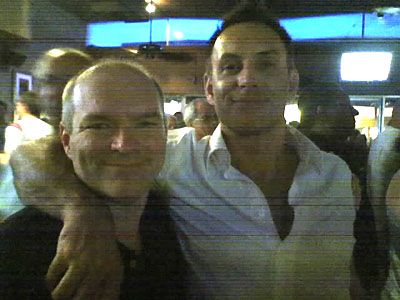