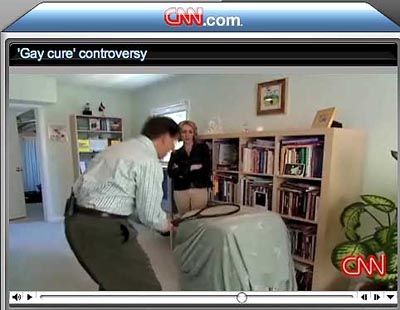 The Malcontent has video of Richard Cohen’s appearance on CNN. CNN’s website also has video. Pam Spaulding offers background on Cohen, and Steve at A Tenable Belief reacts to Cohen’s techniques.

Warren Throckmorton seems as freaked-out by Cohen’s antics as other XGW readers are. He emailed me last night after writing about it on his blog:

When my wife watched the clip (I taped it), she said she couldn’t get past the “ick factor” to even evaluate what was said. We discussed which was the ickiest, the tennis racket slamming the pillow while screaming at mom; or the client-cuddle technique where Richard holds his client like a baby in a kind of nursing position. We couldn’t decide.

I think Deborah Feyerick did a good job of keeping her journalistic game face on during the pillow assault and client hugging.

Exodus has recently distanced itself from Cohen, no longer listing him on their “Other Helpful Organizations” page and has taken a position against touch-therapy. I emailed Alan Chambers this morning seeking confirmation of Exodus’ position and Alan was kind enough to reply indicating he is equally horrified by what he saw and reiterating Exodus’ position:

“Holding therapy is one of the “techniques” that Exodus forbids its members to use.”

Note: When people many of us disagree with are willing to share directly with Ex-Gay Watch I expect readers to treat them with respect. You may disagree with what they say but do so politely in your comments. I won’t hesitate to delete rude or inappropriate comments.