…is what anti-gay / ex-gay activists Michael Brown (left) and Arthur Goldberg (right) would have you believe.

…you were involved with civil rights movement years ago. Did the leaders say, ‘Look, our kids, our black kids are killing themselves, hanging themselves because they’re being rejected by society, so you’d better accept them’? 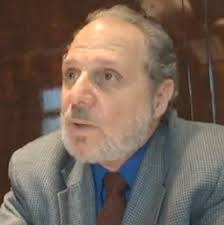 You know, the fact of the matter is, I’m a Jew. Okay, we were heavily discriminated against as Jews … You don’t see the Jews complaining about, ‘I’m a poor victim.’

Brown then finishes off this train wreak of thought with this:

Absolutely, and you didn’t hear about all the Jewish youth in the ghettos who were going to kill themselves because life was tough.

(The real question is, how many of those kids that did kill themselves were LGBT?)

Their blindness to the obvious difference between the hardship these youths faced, and those faced by LGBT youth is stupefying.

Unlike LGBT persons, of all ages, Blacks, Jews and other persecuted minorities are oppressed en-masse. No matter the prejudice they faced, due to skin color, ethnicity, religion, etc., so did their families, friends, religious and social groups. From birth, they shared a collective support structure.

Generally speaking, the racial qualities of same-sex orientation and the transgendered are unseen until exposed, openly expressed or self-identified as being so. By extension, the disproportionate number of gay youth suicide rate can also be invisible to those don’t take into consideration the WEALTH of prominent factors responsible for it.

Even under the best of circumstances LGBT youth are far more susceptible to social stigma, rejection from loved ones and friends, emotional and physical isolation, and in some cases, being kicked out of their homes, and too often, the feeling of no hope of ever reaching a place in life to where things get better.

Free from the threat of being kicked out of my home, I can personally attest to having experienced all of those things, including attempting suicide.

Perhaps a reminder, but a good one for those of you in dire straights who haven’t made it out on your own yet:

In other words, there is life after HELL.

Well the fact of the matter is, the person who — the gay activists have a much greater suicide rate…

A majority of suicide attempts by homosexuals occur during their youth, and gay youth are 2 to 3 times more likely to attempt suicide than other young people. [emphasis added]

Further, according to the Centers for Disease control and Prevention (CDC):

A nationally representative study of adolescents in grades 7–12 found that lesbian, gay, and bisexual youth were more than twice as likely to have attempted suicide as their heterosexual peers. [emphasis added]

I think it’s logical to conclude that the proportion of successful suicides are in direct proportion to attempted suicides. That’s more than twice of those deaths coming from a fair extrapolation of an estimated 6-7% of the population.

ON TOP OF ALL THAT, Arthur Goldberg and Michael Brown are asserting that ex-gay / reparative / conversion therapy, are not contributing factors to the increased proportion of LGBT youth suicide, or that they are even harmful.

Among many, many others, there are a host of individuals at Beyond Ex-Gay who would beg to differ.

Much if not most of those who feel the need for, or are forced into ex-gay therapy are motivated by so-called “deeply held religious beliefs.”

So, to be fair, some parents and those that seek ex-gay therapy on their own, truly fear for the fate of their eternal soulsand/or simply long for the ease of the all-inclusive socially accepted lifestyle of having an opposite gender partner and children.

However, as the SPRC (link, above) puts it:

Most religious denominations continue to condemn homosexuality as sinful and provide a rationale for marginalizing LGB[T] people.

Numerous religious organizations and their followers have an obsessive, almost demonic LUST to malign and smear the very humanity of LGBT persons — of all ages — with vindictive and malicious invectives consisting primarily of, often blatant, insinuations that LGBT persons are sexually-promiscuous disease-spreading perverts in order to convince us, those who support us, and the rest of society that we deserve all the rights and respect reserved for fecal matter, in the name of “Christianity” and “morality.”

And that it’s “God’s Will” that we either fully expunge our same-gender attraction and then fully import some ambiguous and unknown opposite-gender attraction, live a life of loneliness or settle for something inbetween — lest we be doomed to God’s ever-loving eternal lake of fire.

IMNSHO, Goldberg, Brown, and a host of other anti-gay / ex-gay activists are directly responsible for the additional influence that result in the psychological maiming that too often leads to LGBT persons attempting and completing suicide, especially youth.

Three Mormons speak of the horrors they went through in their youth:

…gay youth are 2 to 3 times more likely to attempt suicide than other young people.

Add to that, the harm caused by shame-based ex-gay therapy, and Arthur Goldberg’s assertion and Michael Brown’s agreement that it is “greatly, greatly, greatly exaggerated” becomes a denial of the ongoing genocide of gay youth — due specifically and directly to the anti-gay / ex-gay efforts perpetrated by them, and activists like them.