A hard-line “ex-gay” splinter group from Exodus International formally announced its political intent this week, in a press release that gets a bit carried away with self-flattery. Italics are mine. 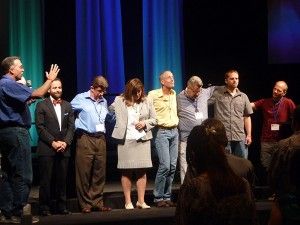 Restored Hope Network is pleased to announce its Restored Hope Board of Reference comprised of strong, competent and fearless leaders who choose to stand with the new ministry and the truth that Jesus still transforms lives in conformity to God’s will.

This roster of endorsers constitutes a miniature Who’s Who, not of the Christian Right (which would include Focus on the Family and the ethics wing of the Southern Baptist Convention), but of a Dominionist wing of Christianity that seeks to imprison or execute sexual minorities, suppress religious minorities, and replace the U.S. Constitution with its own harsh interpretation of the Bible.

We’ll be reporting more on some of these individuals — some of whom received their degrees from fundamentalist diploma mills, and in 2009 steered Exodus International toward involvement in Uganda’s kill-the-gays legislation — in the near future.

The RHN press release admits that the organization’s objective is power and authoritarian obedience — not prayer or sexual and religious honesty.

We proclaim that Jesus Christ has life-changing power for all who submit to Christ as Lord; we also seek to equip His church to impart that transformation.

To RHN, Christian religion is a means to accumulate power and to force others to submit to its will — which it contends is the same as God’s will. We’ll be exploring RHN’s conflation of its own will with God’s will — in short, a form of blasphemy — in upcoming posts.