During the years from 2005 to 2007, IRS records show Exodus designated over $1 million for “various education programs and publications that explain how to change sexual orientation…” 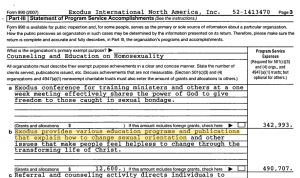 This period begins several years into Alan Chambers’ tenure as Exodus President, and covers what might be called their pinnacle.  While those of us who study Exodus may not find this particularly startling, we must remember that they have vehemently denied ever having this as their goal.  To have an official record stating those intentions is important.

Of course, Exodus’ history is littered with evidence of their emphasis on change.  Their motto, Change is Possible, has been plastered on billboards across the country.  They have routinely claimed a 30% to 50% success rate in changing from homosexual to heterosexual (a laughable figure), and even paid $100,000 for a study intended to substantiate that figure.  To this day the Exodus bookstore features books on reparative therapy by Joseph Nicolosi and others which promote pseudo-scientific theories on causation and conversion of homosexuality.

Exodus representatives repeatedly deny the idea that they seek to bring sexual orientation change to anyone.  In a symphony of semantics, they deflect responsibility for most anything they do.  In a particularly sarcastic article written in 2009 when Exodus could still afford professional PR people like Julie Neils, she wrote:

If I had a dollar for every time I’ve heard the words, “Exodus International” and “religious group that claims to cure gays” in a sentence I’d be rich . . . and in Tahiti right now.

Exodus also makes a big deal of the claim that they only exist to help those who seek them out — those “400,000 phone calls and emails” we are always hearing about.  Until 2006, Exodus put the following expense claim on the same form to the IRS:

Missions and outreach projects allow Exodus to reach individuals not actively seeking help who may be open to change.

Again, hardly a surprise to those familiar with Exodus but basically we have here evidence of their intent — ironically enough — to recruit those not “actively seeking” their help in the first place.  This directly contradicts their own claims, but Exodus has a way with words that enables them to say one thing and mean another.

Perhaps equally significant is the fact that this verbiage has been removed in years since.  Clearly Exodus still does these things yet they don’t wish to make that fact so obvious as they once did.  What kind of message does all this double-talk send?  Perhaps it is just this kind of mixed-message that sends churches like Willow Creek in the other direction.