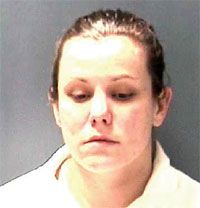 A lesbian is suing a police department she says sent her to an evangelist for ex-gay therapy.

In April, 2010, the family of Amanda Booker requested she be given therapy for her drug addiction. A court order commanded Bartow County Sheriff’s Department to take her to Northwest Georgia Regional Hospital in Rome, GA.

She suffered seizures on the way, however, and was taken instead to Cartersville Medical Center. It was there, Booker alleges, that police officers prevented her from contacting her female partner and made “numerous threats concerning her lesbian relationship.”

From there, Booker was taken to stay in a private home for a week and then to the home of evangelists Chris and Donna McDowell, who allegedly tried to “convert Ms Booker from being a lesbian” for a fee of $600, paid by the county.

Booker was arrested a few days later after she “escaped” and returned to her mother’s house.

A lawsuit filed by Booker’s attorney, Anthony Perrotta, on May 13 claims that the Bartow County Sheriff’s Department considered it “normal procedure … to punish homosexuals and persons holding different religious beliefs.” The lawsuit continues:

Sheriff Milsap told the GA Voice the charges were “the most absurd thing I’ve ever heard in my life,” while Brown declined to comment.

Perrotta says his priority is to get Amanda Booker out of Pulaski State Prison, GA, where she has been held since October, 2010, on charges that include damaging a police vehicle — an incident that occurred during her arrest, which the lawsuit portrays as aggressive, humiliating and without warrant.

Update: Thanks, Bene Diction, for notifying us of this website for Mercy House, the ministry run by Chris and Donna McDowell, the couple alleged in the lawsuit to have held Booker and subjected her to “ex-gay” treatment.

Second Update: The Mercy House website is now disabled. There is no Google cache.