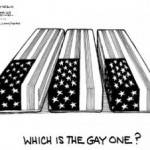 I wanted to start Part 2 with the beginning chapters that put the rest of the book in perspective, but this issue seems timely enough to skip to.
—
Chapter 21: Gays in the Military, by Joe Dallas, co-editor and main author of the book.

It should first be observed that while Scripture condemns homosexual behavior, it says nothing of the general characteristics of homosexual people. [p378, emph mine]

Except when Scripture actually does speak to the characteristics of homosexuality:

Romans 1:26-32: Paraphrased: Furthermore [re the example of homosexuality], since they did not think it worthwhile to retain the knowledge of God, he gave them over to a depraved mind, to do what ought not to be done.

They have become filled with every kind of wickedness, evil, greed and depravity. They are full of envy, murder, strife, deceit and malice. They are gossips, slanderers, God-haters, insolent, arrogant and boastful; they invent ways of doing evil; they disobey their parents; they are senseless, faithless, heartless, ruthless…

But wait, he clarifies:

None of these verses describe the mannerisms or personalities of homosexual people. They don’t declare homosexual men to be culturally effeminate, nor lesbians to be masculine…

He goes on for another 2 pages to take the distraction of needless stereotyping out of the argument—so as to move onto “real” arguments, like this one:

Joe Dallas: Because of the obvious advantages of intercepting and understanding terrorists’ communications, language specialists’ skills are critical and not easily replaced. It could be argued that these specialists knew of the ban before enlisting, then speculated that had they opted not to enlist it’s likely that other specialists who were heterosexual would have enlisted in their place. [p387]

He then attempts to characterize the comparison of GLBT integration with the integration of African Americans as being unfair:

Thus, since skin color dictates WHO someone is, opposition to the military integration of African-Americans was “unreasonable prejudice.” Unlike the perfectly reasonable prejudice it takes to define WHO a person is as being WHAT they’re attracted to (read: genitalia).

It’s a glorified defense of the “ick factor.” And since when is squeamishness an indicator of military readiness?
—
He also quotes Elaine Donnelly, executive director of the super-duper anti-gay Center for Military Readiness.

References to her go to her congressional testimony (pdf). You can also find her truncated views in a recent Citizenlink article. Fortunately, a recent email I received sums it up nicely:

Of course, repealing DADT isn’t just social tinkering with our armed forces. It threatens the safety and morale of troops–who must trust and rely upon each other–by introducing sexual tension in the barracks. It would also endanger the religious-liberty rights of chaplains and servicemen and women to share their beliefs about God’s design for human sexuality.

Beside having all the elements of a homo-erotic thriller, let’s not forget about the “sensitivity” classes that “may” be forcibly thrust upon our oh-so-fragile best and brightest, not to mention the potential annihilation of their “deeply held views based on religious [prejudice] premises… [p390]”

Leading us to THE quote of the chapter:

But in an atmosphere in which objections to homosexuality seem increasingly frowned upon, it may now be the traditionalist who will feel bound by a Don’t Ask, Don’t Tell policy. [p391]

It would appear that their “deeply held” objections also extend to pertinent facts on the matter:

It has also increased the number of so-called “moral waivers” to recruits with criminal pasts, even as the total number of recruits dropped slightly. The sharpest increase was in waivers for serious misdemeanors, which make up the bulk of all the Army’s moral waivers. These include aggravated assault, burglary, robbery and vehicular homicide. [emph mine]

aggravated assault: a reckless attack with intent to injure 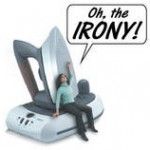 So, “it could be argued” that Joe Dallas and Focus on the Family consider bunking with a half-cocked thief who’s driving habits have been proven to be fatal to be just the kind of confidence building cohesion that a military unit needs. That, and the feelings of discomfort that may accompany dropping the soap in the shower in front of an ex-con.