PFOX stands for ‘Parents and Friends of Ex-gays and Gays’–despite the fact that the organization is not run by ex-gays, and repeatedly and openly expresses a vituperative disdain for all things gay.

One of their more outlandish claims is that there are twice as many “ex-gays” as there are gays. In census terms, that’s about 18 million ex-gays.

You can read about their latest escapade below (For recent coverage, see Google):

“It is about time Disney treated ex-gays with the respect they deserve,” said Bobbie Strobhar, the stockholder who submitted the shareholder resolution. “Former homosexuals are true models of courage who have been vilified by gay activists.”

Dr. Michael Brown weighs in on the matter via Focus on the Family’s Citizenlink, to assert that ex-gays are some of the most discriminated against in America:

Disney Stockholders Mull Resolution to Protect Ex-Gays
—
“If you’re going to have these discrimination laws in policies, then by all means include these as a special class of people,” Brown said.

I think it’s worth noting that Brown refers to those who identify as formerly-gay as “these.” 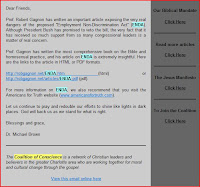 That succinct little bit of bluster is in light of an email in which he steers readers to an article—written by NARTH’s Prof. Robert Gagnon—that Brown describes as “exposing the very real dangers of the [then] proposed “Employment Non-Discrimination Act””–>

The screen cap of the cached email above would seem to concur with those dates.

Here’s a snippet of Gagnon’s article that Brown links to:

Don’t ENDAnger Your Liberties in the Workplace

The bill will virtually codify you as a bigot so far as the federal government is concerned if you oppose homosexual practice on moral grounds.
—
If you are not convinced that this will be the outcome, try including “pedosexuality” (i.e. pedophilia), a sexual orientation toward children, under the rubric “sexual orientation” [emp mine] 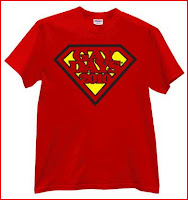 The celebration of Gay days at Disney is traditionally marked by the wearing of red.

So what’s the color of ex-red?