A recent article in Scientific American by Thomas Maier has cast into doubt the veracity of a study published 30 years ago that purported to demonstrate that some people can change their homosexual orientation to a heterosexual one.

The study in question was carried out by the most pre-eminent American sex researchers of the last century, the husband and wife team of gynecologist William Masters and psychologist Virginia Johnson. In their own time they were as famous as Alfred Kinsey and like Kinsey, their names became synonymous with the study of human sexuality, if not with the notion of sex itself.

As with the Kinsey studies of the 1940s and 50s, Masters and Johnson’s scholarly books on human sexual responses attracted popular audiences in the 60s and 70s. Based on laboratory research with human subjects, they developed a model of sexual function and dysfunction that would eventually serve as a template for the Sexual Dysfunction section of the 1980 Third Edition of the Diagnostic and Statistical Manual (DSM-III) and the subsequent volumes since then.

Not as well known today is their 1979 book, Homosexuality in Perspective, in which they describe their research history and objective:

A report of the basic science investigation of heterosexual function was made to the health-care professions in 1966 with the publication of Human Sexual Response . . . the second step in the investigative process was the creation of a 10-year clinical control period for the [Masters and Johnson] Institute’s newly developed techniques for treatment of heterosexual inadequacies [reported in their second volume, Human Sexual Inadequacy, published in 1970].

The homosexual phase of the open-ended investigation of human sexual response began in 1964 with the Institute attempting to respond to the overwhelming cultural and scientific need for an objective investigation of homosexual function. The same protocol of basic science precedence to new clinical treatment constructs was employed. The research program was initiated with an evaluation of physiologic response patterns demonstrated by sexually experienced homosexual men and women responding to effective sexual stimuli in a laboratory setting. This evaluation of homosexual function was completed in 1968 after almost five years of laboratory involvement.

The 10-year period of clinical control for creating and evaluating treatment techniques for homosexual dysfunctions and dissatisfactions began in 1968 and terminated in 1977. With this textual presentation, the Institute reports to the health-care professions both the basic science investigations of homosexual function and the new clinical programs designed to treat sexual inadequacies of homosexual orientation [pp. 235-236, italics added].

Masters and Johnson stated goal of doing research to better the sex lives of gay couples constituted a truly radical step for their time, particularly since the research was reported to have started years before the American Psychiatric Association’s 1973 removal of homosexuality from the DSM.

However, the authors went even further. In their study of 151 homosexual men and women with “sexual inadequacy,” they divided the latter term into two categories: “the sexually dysfunctional and the sexually dissatisfied.” The latter were defined as “men and women who expressed the desire to convert or revert to heterosexuality” (p. 240). Conversion and reversion are defined:

For a homosexual individual to be considered as a candidate for therapeutic conversion to heterosexuality, he or she would have had little or no prior heterosexual experience (Kinsey ratings of 5 or 6). Homosexuals listed as candidates for reversion to heterosexuality had Kinsey ratings that ranged from 2 through 4. These applicants represented three basically different lifestyles. The first was a group of men and women who had been living overt homosexual lives with or without an established relationship. The second was a similar, socially oriented group of men and women who were living as covert homosexuals. The third group was composed of married men and women living openly as heterosexuals and involved in covert homosexual interchange [p. 240].

Master and Johnson report treating 67 people (54 men and 13 women) and their opposite sex partners for “homosexual dissatisfaction.”

Thirty-one of the homosexual men were married and 2 men were living in long-term male-female relationships and were listed as married for reportorial ease. Twenty-one men were without committed relationships and were seen for reversion or conversion therapy with their female partners of choice. Of the 13 lesbian women admitted to therapy, 7 were married and the remaining 6 women were seen in therapy with their male partners of choice [p. 244].

What was the nature of the treatment for homosexual dissatisfaction? Masters and Johnson treated them the same way they treated sexual dysfunction in physiologically normal heterosexual couples. “Since the same problems of impotence and anorgasmic states existed in both homosexual and heterosexual individuals, it seemed reasonable to assume that these dysfunctions would respond equally well to similar therapeutic approaches, regardless of whether the dysfunctional men or women were of homosexual or heterosexual orientation” (p. 255).

Anyone familiar with the history of sexual conversion therapies will recognize the usual stated criteria for success: “First, there must be a high degree of client motivation for alteration of sexual preference, and second, there must be an available an understanding opposite-sex partner who could be a major source of psychosexual support during the sexual preference transition phase” (p. 256).

How were the homosexually dissatisfied treated? Masters and Johnson used a two-week “rapid-treatment technique” designed for heterosexual inadequacies and which they describe in detail in their 1966 book, Human Sexual Inadequacy. This involved:

What actually was discussed in those therapy sessions is not clear from this report. Masters and Johnson promise “a detailed discussion of the psychodynamics of the dual-sex team therapeutic format in future publications” (p. 258) however I am unaware if such publications were forthcoming.

The researchers attempted follow up of their subjects for five years all of the men and women “who were not overt treatment failures during the acute phase of the treatment program” (p. 259). These included telephone calls and occasional visits to the clinic if difficulties developed. They sagely note:

Of course, there can never be real security in any information of this type. There is no doubt that some of the clients have purposefully misled the therapists with false reports. Others may have inadvertently accomplished the same result. As long as any clinical program is forced to rely upon data obtained by any form of verbal or written interrogation, the investigator can never be fully confident of the security of his information, regardless of the statistical evaluations made of the reported material [p. 260].

What about the long-term follow up? They were designated as overall failure rates (OFR). I’ve slightly adapted Masters and Johnson’s Table 17-2 (p. 400) which compares the IFR and OFR to include the number of subjects who were lost to follow up: 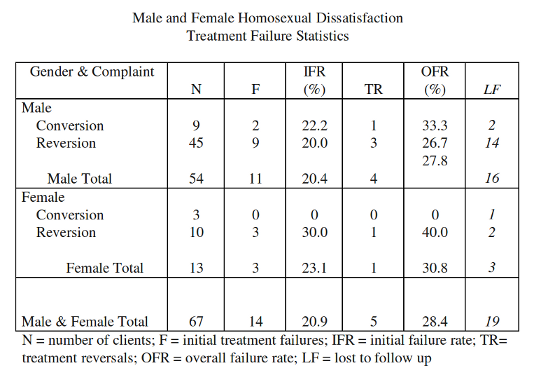 So why have I spent an entire morning at my computer reviewing a 30-year-old study rather than at the East Hampton beach? It seems that none of the study’s findings may be real.

That, at least, is the opinion of Thomas Maier, who has written a biography of Masters and who wrote in Scientific American:

Most staffers never met any of the conversion cases during the study period of 1968 through 1977, according to research I’ve done for my new book Masters of Sex . . .

When the clinic’s top associate, Robert Kolodny, asked to see the files and to hear the tape-recordings of these “storybook” cases, Masters refused to show them to him. Kolodny—who had never seen any conversion cases himself—began to suspect some, if not all, of the conversion cases were not entirely true. When he pressed Masters, it became ever clearer to him that these were at best composite case studies made into single ideal narratives, and at worst they were fabricated.

Apparently Masters and Johnson may be just the latest in a long series of conversion therapy proponents, who when pressed, have been unable to substantiate their findings to outside sources.

And another one bites the dust.

—
Jack Drescher, MD, a psychiatrist and psychoanalyst in New York City, is Clinical Associate Professor of Psychiatry, New York Medical College. A member of the DSM-V Workgroup on Sexual and Gender Identity Disorders, Dr. Drescher is the author of Psychoanalytic Therapy and the Gay Man and has edited two books on conversion therapy: Ex-Gay Research: Analyzing the Spitzer Study and Its Relation to Science, Religion, Politics, and Culture and Sexual Conversion Therapy: Ethical, Clinical and Research Perspectives.

He may be reached at his web site, jackdreschermd.net