I just finished watching the Lifetime special Prayers for Bobby.  It came across true and accurate to what I know about the matter, and may have even been somewhat reserved considering the time frame (circa 1980).  The mother’s reaction and the “help” her son Bobby was given could easily take place today in just that way — it does take place today in just that way.  Ryan Kelley did an excellent job as Bobby, as did Sigourny Weaver as his mother, Mary Griffith.  The pain, condemnation and agony was far too real, and I cried through  much of it.  It was very hard to watch in places, not because it went into deep detail, but because each portion was a representation of my own pain, and that of so many with whom I have talked.  The movie was a series of triggers for all of it. 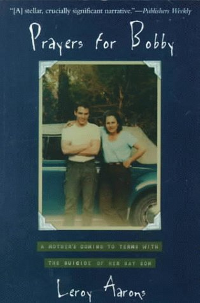 I’ve lived much of the agony of a Bobby so I know it well, but I have been spared personally the hideous way in which ex-gay related programs abuse the parents.  PFOX is an extreme version of this, but Exodus and Love Won Out conferences have so often been aimed squarely at parents.  The byproduct of the pseudo-scientific underpinnings of ex-gay theory is that, one way or another, parents are to blame.  And once they are properly saddled with that grief, they are led to believe that somehow, if everyone works really hard and prays really hard (pays whole lot?), their son or daughter can be free of this “awful curse.”

When I first heard it, I thought the sermon was a bit too harsh to be realistic.  Moments later I remembered that in my work with some churches. and even at college, the idea that the funeral of one who was “lost” would serve as a morbid sermon to others was a common theme among more than a few pastors.

As I said, for me it was a very emotional ride.  They had so much to cram into a short period that I’m afraid it may be hard for those not already involved in some way to appreciate the depth of the issue.  If you watched, what was your experience or impression?

Update: I’ve added an image of the book with a link for those who might now want to get a more detailed version of the story and to catch a glimpse of the real Bobby and his Mom in front of that cute little car. I wonder what he would have written by now.