David Pickup appears in the next to the last frame — this is only a preview.

David Pickup, as reported in the previous post, is on staff with Jayson Grave’s Healing for the Soul, described as a private counseling practice specializing in sexual addictions and unwanted same gender attractions.  Graves is also a member of the Exodus International Board of Directors.

While Pickup’s Healing for the Soul bio claims he is a life coach and not a therapist (doesn’t do therapy), XGW writer Dave Rattigan has called attention to the fact that he claimed to be just that, a reorientation therapist, while speaking from the audience of a recent American Psychological Association conference. 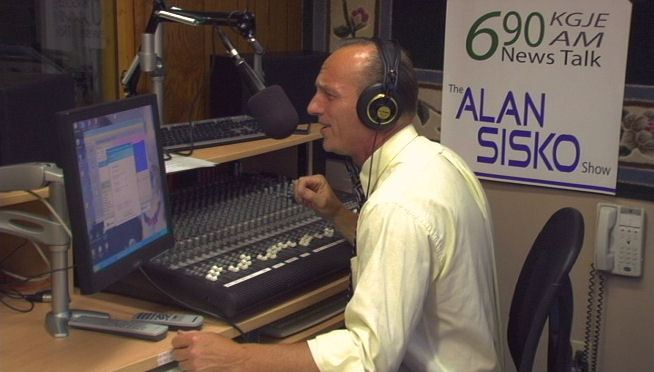 From Internet Movie Database (IMDB) listings, it would appear Pickup is also an actor.  Queerspiracy, featured above, is a comedy which pokes fun at the notion that one can “become gay” through some sort of present day event, in this case a visit to a pride parade.  Pickup plays nationally syndicated radio talk show host Alan Sisko, who apparently agrees that there is indeed a “queerspiracy.”

Dr. Patrick Janeway, after what he describes as his own ‘near gay’ experience, levels a startling accusation: taking a child to the Unity and Diversity Pride Parade very well may turn them gay. Join NewsCorridor’s Dan Stewart as he investigates this shocking allegation by interviewing not only Dr. Janeway, but Nick Warren and Justin Davies, a gay couple whose own adopted son, Brad Haas, came out soon after attending the very same parade. Stewart leaves no stone unturned, interviewing such luminaries as University of Los Angeles GLBT professor Dr. Mandy Sawyer, nationally syndicated radio talk show host Alan Sisko, Second United Church of Los Angeles’ Pastor Tom Hansen, and national gay rights group HAPI’s (Homosexuals Against the Public Intolerence) very own Timothy Picard as he looks into Dr. Janeway’s ‘Queerspiracy.’

The other two listings, provided in the previous post as well, are:

A dark sounding drama about a girl who is sexually abused (and gets pregnant) by her father. In order to hide this tragedy she seduces her blind date and accuses him of rape. Disgusted by her actions, she returns home to face her father and rid herself of the torment forever.

Flower Edwards, who is a quite an island girl knockout, but a terrible actress, plays the cooly-named Shane Miller. A room mate of hers, who was a prostitute at some private bar, is murdered. The police department won’t investigate the matter because they claim the place is clean. So Shane uses her body to get to the bottom of this case. And let me tell you, she does!

The acting isn’t very good (we’re talking about people who only use acting as a secondary device to their means), but the middlecore “philosophical discussions” are very well done. Flower is great in that category. Certainly, this is a better example than the last film I saw featuring “middlecore”. Maybe this will take off in the same way that soft and hard types of these films have.

Contains female nudity, front and back, lesbian sex and hookers.

While his appearance in Queerspiracy is obvious, we have asked Pickup to confirm his participation in the other two films without reply. We are checking through other sources, though so far it looks likely that he is the same David Pickup in all three.

On the Queerspiracy site, Pickup is described as follows:

David Pickup has appeared in Musical Theater, Film, Television, and Podcast roles on Outlaws, Pearl Harbor, Arrest and Trial, Into the Woods, Houston Opera, and is currently a co-host on The Homecast Show, a new podcast-only internet show. David graduated from the University of South Florida with a BA in vocal performance, and from National University with an MA in Psychology. His major contribution in life is through his career as a psychologist. He has a great love of acting, and his expertise in understanding human psychology is a major component in creating his characterizations. As an actor, he studied with Michael Kearns of Los Angeles.

Let’s keep in mind, this is the same person Focus on the Family has featured in a clip about the “fight against the unfair gay agenda.” A man whose employer sits on the board of Exodus International, the largest ex-gay related organization in the world. I doubt anyone here is particularly concerned if the man has artistic outlets on the side. I, for one, would pay to see Joe Nicolosi as Mary Sunshine in Chicago. But when one takes all the facts about Pickup into account, he is unfortunately an apt testimony to the sort of person one is likely to find in the ex-gay, reparative therapy racket. And while being gay is not one of them, some people who seek out this kind of help have real problems and they deserve better.