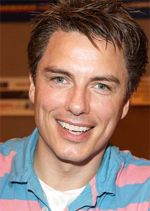 Gay actor John Barrowman met with an ex-gay during the filming of a BBC documentary about the origins of homosexuality.

The British-American entertainer, best-known to international audiences as Captain Jack Harkness in the the sci-fi serial Doctor Who (and its spin-off, Torchwood), met with Ron Woolsey, aka Victor J Adamson, a Seventh Day Adventist pastor from Arkansas.

Woolsey’s part in the broadcast was surprisingly brief. He reiterated the common ex-gay claim that being gay was a destructive lifestyle:

My life was hurting people. I saw my parents weeping, so I looked at my situation and I was under great conviction that if I wanted to be a Christian I would need to set that aside. I could choose to chart a different course for myself and it was a matter of retraining my mind.

Barrowman asked him whether being gay could simply be a matter of wiring in the brain. Woolsey’s reply confirms what most of us have experienced for ourselves, that being ex-gay does not change underlying orientation, but simply denies it:

My brain would do the same thing [in a non-sexual way] with chocolate. … There are things that I deny myself that are not good for me. To this day when someone lights a cigarette that smell is attractive to me. I don’t smoke, though.

Alice Wignall of The Guardian later talked to Barrowman about his experience:

I met someone who claims to be a recovered gay, an ex-gay, and is married and has … a couple of children now. … I respected [Ron, the ex-gay] for coming to talk to me because it probably took a lot, but he was out there to preach … he was preaching … he had a faith. … I spoke to Ron and through the course of the whole interview … there is one moment where I actually made a joke about him being – ’cause he showed me pictures of himself as a young man – and I made a joke that … he was good-looking and he completely – his guard went [up], and he didn’t want it. And it was interesting for me at that point because at the end of that interview I actually felt quite sorry for him and I actually felt quite sad because here’s a man who is denying who he actually really is and telling himself that he is this other man, but yet he says he still has feelings, but he knows how to control and deny them … because he believes that’s the wrong way to live. I didn’t ask him because I didn’t feel I was going to insult [him] … I was going to ask him if he used Viagra in order to have sex with his wife … But I thought no, you know what, he’s taken the time to sit here with me, I’ve asked him a lot of probing questions, I don’t think I need to be that digging with him.

But what did really upset me about that is Ron has a website where you can go to to cure yourself of being gay and get information and the thought that young gay men and women will go to his website because he will just start that vicious cycle again that he’s gone through, where he married someone, he divorced them because he realized he was gay, then he was cured again and he’s living this false existence with this woman and his child.

Barrowman also talked to Pete Price, the Liverpool radio host who as a teenager in the 1960s endured extreme aversion therapy to cure him of his homosexual feelings. Price was injected with something to make him violently sick “at both ends” as he recounted his gay sexual experiences to a psychiatrist. After a 72-hour ordeal, the distressed young man was about to be wired up to electrodes when he opted out of the treatment.

The documentary, broadcast on BBC2 earlier this week, followed the actor on his search to find a biological root to his sexuality. Overall, it was a well-balanced tread through current research. The conclusions offered few dead certainties, but did successfully establish that nature, not nurture, was the most probable cause of homosexuality.

Viewers in the UK can still catch the documentary on BBC iPlayer, here. Find extra coverage, with clips (possibly available outside the UK), here.