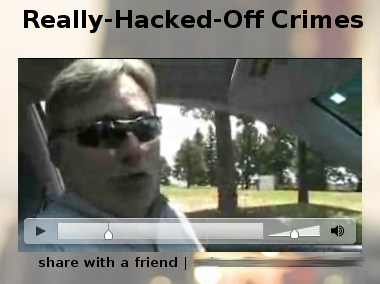 This video was released almost two weeks ago by Focus on the Family through their political mouthpiece, CitizenLink, so you may have already seen it or read commentary about it. Regardless of where you might stand on hate crimes laws, this kind of glib, heartless characterization seems unwarranted and cruel. It may also signify a certain amount of desperation. When you watch, pay attention to the last few comments.

We’ve heard gross distortions of this legislation apparently designed to scare people with the idea that, if it passes, free speech will be curtailed, pastors will be jailed, and innocent little grandmothers will be arrested for standing on a lonely street corner doing nothing more than offering tracts to passersby. What you will find at the end of this clip is what I believe is actually at the heart of the matter. Focus, et al, simply can’t allow sexual orientation to be codified into federal statutes as real and fixed, even as a byproduct.

After all the time and money they have spent trying to convince us that homosexuality is nothing more than a behavior, and a sinful one at that, it is against their self-interests to allow the obvious to make it into law. So in another example of the ends justifying the means, they use fear and lies to deny another vulnerable group the same protections against violent hate crimes that they themselves enjoy as members of a protected group by virtue of their religion.

Again, no matter where one stands on the need for hate crimes laws in general, who would laugh at such things as this? Unfortunately, the answer came quickly from Exodus VP Randy Thomas. Tell us again about your compassion, Mr. Thomas.