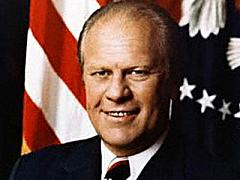 In this age of Culture War and extreme partisanship it seems rare to find a politician whose positions are determined by principle rather than party affiliation. The passing of Gerald Ford, 38th President of the United States is a gentle reminder of a time when bi-partisan was a practice rather than a campaign claim.

Ford was by all accounts a kind and gracious man who placed the healing of a nation above his own political power. And though he made decisions that were not at the time popular – including pardoning President Nixon – in hindsight his choices seem appropriate and necessary.

During office, the President considered himself “a moderate in domestic affairs, a conservative in fiscal affairs, and a dyed-in-the-wool internationalist in foreign affairs.” In recent years, his political activism has been limited to lending his voice and name to those seeking to return the Republican Party to a welcoming organization that focused on unifying those who share a common fiscal policy rather than waging war on those with diverging “values”.

In March 2002 the former President joined the advisory board of the Republican Unity Coalition, a gay-straight alliance whose goal is “making homosexuality a ‘non-issue’ for the Republican Party” and whose members and friends include senators, congressmen, governors, mayors, and other political operatives and intellectuals.

At a time when the freedoms and equalities of a subset of citizens are being debated with cries of “evil” and “destruction of society”, perhaps we can reflect on the words of a man who was called to serve at a time of great unrest, when inflation, recession, corruption, and the loss of prestige of the Presidency all conspired to leave a country confused, doubtful, frightened and shaken. Perhaps his perspective might have some value in the “great moral issues” debate today.

Asked his position on lesbian and gay families and marriage:
“I think they ought to be treated equally. Period.”

Asked whether gay couples should get the same Social Security, tax, and other federal benefits as married couples:
“I don’t see why they shouldn’t. I think that’s a proper goal.”

UPDATE: The New York Blade has an article going into greater detail on Ford’s pro-gay activism.