Ex-Gay Watch expresses our condolences to the friends and readers of Timothy Kincaid, a longtime writer for Ex-Gay Watch and Box Turtle Bulletin, another blog that intelligently reported and critically analyzed the conversion therapy movement and religious right. 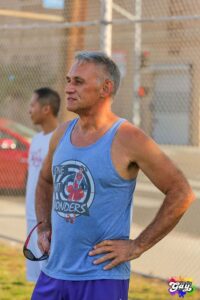 Timothy died suddenly in September 2020. We just found out.

I appreciated Timothy’s role here at Ex-Gay Watch because he brought criticism of the ex-gay movement from a conservative perspective, and because his message appealed to libertarians and political moderates.

He and Daniel Gonzales saved XGW in the mid-2000s with their daily written contributions when I went through a period of burnout as editor. They not only wrote and researched with thought and integrity, they made it possible for us to bring even more good volunteer writers on board.

Timothy went on to greater fame as a writer for Box Turtle Bulletin in 2007.

I include below the remembrance of Timothy by his friends at a sports club in Los Angeles.

Varsity Gay League: Los Angeles
We wanted to share the passing of one of our players and an incredible friend of the Weho Community, as much as Varsity Gay League & Weho Dodgeball. But for those who knew him and cared for him, he is/was so much more than just a player in our leagues, he was a friend.

Timothy Kincaid was always a sweet soul, who enjoyed having fun. When we mean fun, we mean living life to every extent.
On the Dodgeball court, he was an absolute competitor never looking at age as a barrier, or whomever was throwing a ball at him. On the Kickball field he was a leader, a kind soul and willing to do whatever it took to win. At Gym Bar, he was an absolute constant.
While we don’t know enough of his journey to properly share a eulogy, we can say with certainty that his face, his presence, and his life will be truly missed.

He has many close friends sharing stories right now, on social media, and we encourage you to celebrate his legacy with love, empathy and compassion.

In recent years Timothy and I got along poorly because of his political views. Nevertheless, he was a talented and thoughtful writer who valued accuracy and integrity, and he was well liked in his home city of West Hollywood.