An April 2005 article on NARTH’s website that defends slavery was recently brought to light by various websites including Ex-Gay Watch.

Update: The article, authored by NARTH advisory board member Gerald Schoenewolf, Ph.D, has been removed from public view, but a copy of the article is available — see update below.

Wayne Besen publicly called for NARTH to retract the article and Exodus co-founder Michael Bussee sent private correspondence and posted comments to NARTH’s blog admonishing them as well. (Update: Warren Throckmorton has weighed in and advised NARTH to pull the article.)

A NARTH blogger known by the handle “Sojourneer” has posted a response addressing Michael Bussee “and others.” For the record, “Sojourneer” is assumed to be an associate of NARTH because he/she has the ability to post entire blog entries (not just comments) to NARTH’s site as seen here. In other words, “Sojourneer” is not just an independent commenter. Here is NARTH’s response:

Michael and others, regarding Gerald Schoenewolf, Ph.D.

Michael, you are trying to discredit Narth by attacking individual members. You seem to be scouring the Narth website looking for information that you can distort and use for your disinformation campaign. Your resent attack on Schoenewolf is classic. If you can imply he is a racist then his opinion does not count and he becomes invalidated. Then by association, Narth is also racist, homophobic, or religious and Narth has no voice. I think you are doing this because Narth is making a difference in people’s lives and beginning to make an impact on a larger organization like the APA.

As far the article you refer to, I posted the link below for others to read the entire paper in context. It is a rather interesting article title, “Gay Rights and Political Correctness: A Brief History.”

My views on his comments about race are as follows. He is not saying slavery was a good thing nor, is he saying it was no big deal. What he is saying is that good things can come out of bad situations. The good that came out of it was that African people came to America. Coming to America was a great thing because America is the greatest country in the world. When a person has been victimized by some unfortunate circumstance, one way to cope with it is to get something positive out of it. This in no way minimizes the traumatic event. Slavery was an immoral practice and a shameful event in the history of the United States. However, slavery was not just practiced by America. Schoenewolf points this out in the paper. He says that slavery was practiced by the Africans themselves. In addition, slavery was used by many other cultures and countries for many centuries.

UPDATE: As the organization did with another article recently highlighted, NARTH has quietly removed the article referenced above with no explanation of why it was published, i.e. do they agree with it or not? You can view a Google Cache version for now, but this will expire soon. We call on NARTH to exhibit some intellectual honesty by not simply erasing this in an attempt to again revise their history. 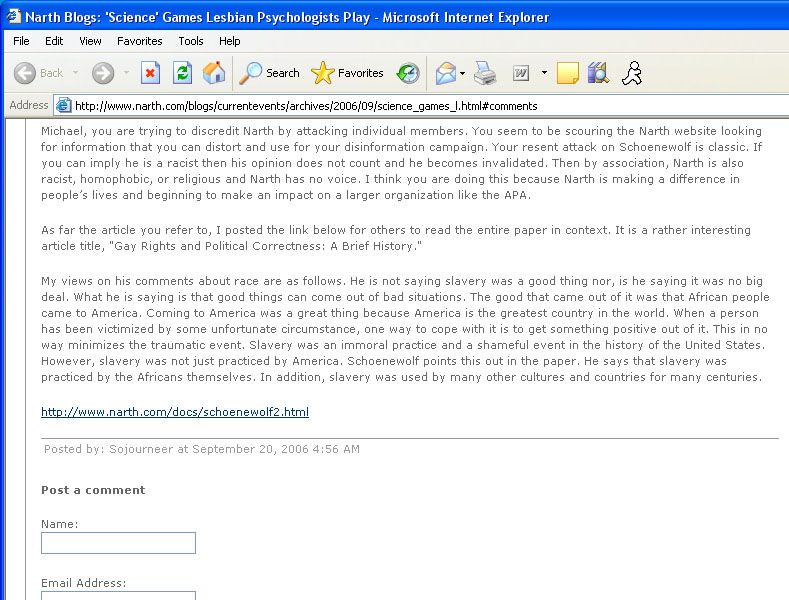