As you may have read recently, NARTH has received a lot of criticism over the callous advice of one of their committee members, Joseph Berger, M.D.  Their response seems to consist of private comments of disapproval followed by a stealth edit of the original article.  Of course, the problem statement was a quote from Joseph Berger so an edit seems rather deceptive.  There is no mention there that the material has been changed, or that they have any problem with what it originally said.  So why was this quote perfectly fine with them yesterday – they published it on their site after all – and now it is not? 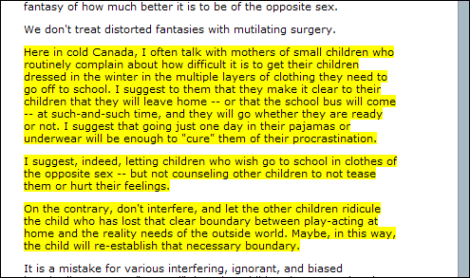 The highlighted section is the part that was edited out. You can view the entire edited article here, providing no more of it dissolves away in the night.  You can also view the full Google Cached version of the page before edit here.  The graphic above was derived from this cached version.

Earlier today NARTH pulled the article discussed above entirely, reference and all.  There is nothing there to indicate it was ever posted.  They also pulled an entire thread from their blog which contained the same Joseph Berger quote from the article.  In the blog section, there is now a comment about their having pulled the post.  While we are glad NARTH has taken some action, we don’t think this was enough in light of the nature of the comments, do you?  Read over the thread for possible alternatives and add your own thoughts.