When Focus goes after transgender issues it’s both sad and comical how little they appear to know. This time they’re all worked up about a transgenderd 5 year old beginning kindergarden in Broward County, Florida. From Family News In Focus on 7/11/06:

(To be clear, Family News in Focus is a radio broadcast. I just took the audio and added a photo montage.)

First let’s have some fun with Paulk’s statement. I’m not sure what testosterone has to do with anything. Does Paulk think testosterone is an exclusively male hormone? If that’s what he was implying then he’s wrong, testosterone is present in both sexes. Here’s a handy diagram that should clear things up: 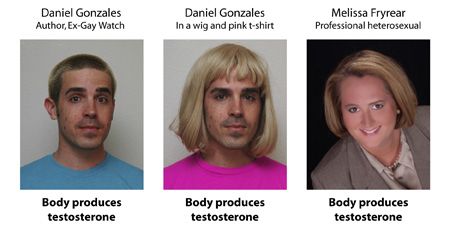 Paulk predicts the child will only become more and more confused. Perhaps Paulk should actually read the DSM:

What really bothered me about Focus’ broadcast is how they would have you believe the APA’s “treatment” is some sort of “fix” that magically makes people folk fall back into line on gender conformity. Sorry but that’s not the case. First, host Bob Ditmer makes a comment about “gender dysphoria” and then plays a clip of Warren Throckmorton talking about “gender identity disorder.”

Note to Bob, those are not the same thing. Here’s a little history on the current revision of the DSM.

Gender dysphoria alone isn’t the same as being diagnosed with GID according to the DSM. Gender identity disorder has two two primary criteria for diagnosis; 1) a persistent cross-gender identification and 2) the resulting dysphoria or mental discomfort.

The standards of care outlined for childhood GID by the Harry Benjamin Standards of Care dictates therapy should focus on:

Contrary to what Focus would have you believe, the accepted treatment sides with the child being able to express their gender in a way which will reduce the child’s dysphoria or mental discomfort. I somehow doubt that’s the treatment Family News in Focus listeners had in mind.

Throckmorton: We don’t know what causes kids to have gender identity disorder, although most thinking on that subject is that there is something of an interaction between biological and environmental effects.

Ditmer: John Paulk, former manager of gender issues at Focus on the Family is outraged.

Paulk: This is a boy, it’s not a girl. He’s got testosterone flowing through him as he ages, and he goes through puberty, he’s going to get even more confused, he’s going to be ridiculed and made fun of in school by other peers no matter how tolerant it is.

Ditmer: The child lives with his parents and three siblings in a middle class neighborhood in Broward county.