Last night, Exodus International announced it was shutting its doors. This came on the heels of Alan Chambers’ apology, and just before the airing of a new episode of Lisa Ling’s “Our America.” Alan Chambers has met with ex-gay survivors, and the encounter was apparently visceral, with no holds barred on the side of the former ex-gays.

However, I remain skeptical, and unsatisfied by this segue. Exodus needs to do more than cut its losses and shutter its windows. It can’t just leave behind its despicable past, hoping people will just forgive and forget. It needs to actively and genuinely atone for hurtful words and actions it has unleashed upon the queer community for its entire existence. And I predict that, with this upcoming “reducefear.org” website, it will try to shirk their moral responsibilities while trying to form a “trust circle” with the very people they have worked so hard and so thoroughly to stigmatize.

Alan has apologized multiple times. All of those times, he has said one seemingly reconciling statement, only to virtually backtrack all of it within the week – careful to tread that line between acceptance and towing the line for his evangelical Christian anti-gay base.

I’ve read his most recent apology – and it seems genuine. It does read like a genuine step forward for Alan and for the actions of Exodus. He acknowledges that gays have real, actual families just like straights:

I am sorry that I, knowing some of you so well, failed to share publicly that the gay and lesbian people I know were every bit as capable of being amazing parents as the straight people that I know. I am sorry that when I celebrated a person coming to Christ and surrendering their sexuality to Him that I callously celebrated the end of relationships that broke your heart. I am sorry that I have communicated that you and your families are less than me and mine.

He acknowledges without mincing words that he is part of an organization that has caused considerable damage not only to its gay victims, but to their parents:

There were several years that I conveniently omitted my ongoing same-sex attractions. I was afraid to share them as readily and easily as I do today. They brought me tremendous shame and I hid them in the hopes they would go away.

He apologized for not standing up against those who slandered gays and lesbians:

I am sorry that there were times I didn’t stand up to people publicly “on my side” who called you names like sodomite—or worse.

These are things that make this apology go beyond his previous apologies.  However – I am waiting to see what the next official moves will be regarding this “Reduce Fear” campaign.

Peterson Toscano, a performance artist activist and ex-gay survivor, predicts that the Exodus International set, the “moderate” ex-gay set, will try to reposition itself as a “Side B” Christian Gay organization. He’s dubbed this “ex-gay lite:” 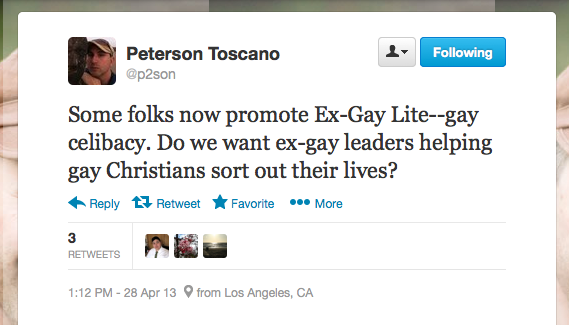 For those who are unfamiliar, “Side B” is a term that describes the subset of Christian gays who, while acknowledging their sexual orientation, do not try to change it but rather live celibate lives in congruence with their religious beliefs.

Moving forward, we will serve in our pluralistic culture by hosting thoughtful and safe conversations about gender and sexuality, while partnering with others to reduce fear, inspire hope, and cultivate human flourishing.

That last part is all well and good – but is Exodus – as “Reduce Fear” – really in a position to reinvent itself as a place for Christian gays to find safety and reconciliation? After years of watching both Alan and Vice President Randy Thomas encourage our civil inequality and declaring gay people’s loves and lives selfish and shameful, opposing anti-bullying measures that protect the most vulnerable kids in school while giving them shoddy advice, taking pride and joy in our losses in the political arena, and carelessly dispensing lies about gays in the guise of scientific fact, I say: No.

I’m reminded of when, a few years ago, actor and ultra-conservative Catholic Mel Gibson was caught delivering an anti-Semitic tirade after being pulled over for driving drunk. His timing was poor: Still fresh in people’s minds was the film he’d released barely 2 years prior, in which corrupt, hook-nosed, sunken-eyed Shylocks in priestly garb savagely condemned the innocent, godly main character to a gruesome bloody death. What a PR nightmare this created. One act of contrition proposed involved Gibson making a heartfelt apology to a local synagogue’s congregation on Yom Kippur, the most solemn day on the Jewish calendar. On paper it sort of made sense: Yom Kippur is the Day of Atonement, in which we Jews turn our hearts to God through prayer and fasting, seeking to atone for sins we’d committed against God. A man seeking to reconcile with us may find it fitting to do so on such an occasion. However, a man whose callous disregard for the historical trauma suffered by Jews at the cause of Passion Plays was so complete that he directed the Devil to stand with the Temple Priests as they watched Jesus die should be no where near a synagogue on that day. In my mind, without any genuine soul-searching beforehand, it is difficult to see such an act as anything but a cynical PR stunt. And a synagogue on Yom Kippur is NO place for PR stunts. Thankfully, the event never took place.

Like Gibson, Exodus has a track record of tone-deaf statements and actions made against a specific subset of people. Their past “apologies” have barely qualified as such. To suddenly turn around and become a place of welcome and counsel for Christian gays who seek reconciliation with their sexuality, when not 2 years ago their website bore official statements condemning gay adoption, is unacceptable.

Why is it unacceptable? Can’t people repent? Of course they can. But Exodus needs to do more than issue grand apologies and furrow their brows for the camera; more than just close up shop and act like nothing that big of a deal happened under their watch. They spent decades – decades! – denigrating gay people by issuing false information about us, using their own supposed heterosexuality as “proof” that we didn’t really exist and therefor didn’t need any political protection, and willingly fought in a “culture war” that has literally cost lives. Lest we forget the “Summer of Hate” that began with a wave of ex-gay publicity and ended with a young frail gay man’s torture and eventual death. Lest we forget the recent epidemic of suicide that has taken the lives of more gay youth than I would ever care to count.

Perhaps it’s time the directors of the organization formerly known as Exodus spend time being part of a flock instead of trying to lead one. An apology from an organization with a history of purging content from their website without an official redaction will always ring hollow. Closing it down and launching a new one like the last one didn’t exist won’t cut it. Let me be clear: There’s nothing shameful about admitting the terrible things you wrote and said were wrong, and taking full responsibility for them. In fact, this is an honorable and difficult thing to do. The problem is, the people who once led Exodus haven’t done this yet.