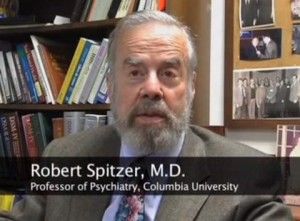 Dr Robert Spitzer, the researcher behind a flawed 2001 ex-gay study, has added to his recent retraction by apologizing for his claims.

The psychiatrist, now 80, already went public with his retraction in an interview with Gabriel Arana of American Prospect magazine. In his 2001 paper to the American Psychiatric Association, published in 2003, Spitzer had interviewed 200 ex-gays provided by conservative ex-gay organizations such as NARTH and Exodus International, then claimed their testimony proved that some homosexuals could change their orientation through therapy.

Those who claim gays can change have relied on the findings for over a decade, despite its obvious flaws. Having already denounced the study, Spitzer has now gone a step further in a letter to Kenneth J Zucker, editor of Journal of Sexual Behavior, the journal that published the study. He writes:

Several months ago I told you that because of my revised view of my 2001 study of reparative therapy changing sexual orientation, I was considering writing something that would acknowledge that I now judged the major critiques of the study as largely correct. After discussing my revised view of the study with Gabriel Arana, a reporter for American Prospect, and with Malcolm Ritter, an Associated Press science writer, I decided that I had to make public my current thinking about the study. Here it is.

Basic Research Question. From the beginning it was: “can some version of reparative therapy enable individuals to change their sexual orientation from homosexual to heterosexual?” Realizing that the study design made it impossible to answer this question, I suggested that the study could be viewed as answering the question, “how do individuals undergoing reparative therapy describe changes in sexual orientation?” – a not very interesting question.

As of today, the Exodus International website still cites Spitzer to bolster its claims of ex-gay success (we noted specific instances in our earlier post). A search of the NARTH website still turns up over 300 citations for this now-thoroughly debunked study. The website of anti-gay lobbyists PFOX continues to promote the Spitzer study to prove that gays can be cured.

Will any of these groups have the honesty to acknowledge not only Spitzer’s apology and retraction, but the very clear reasons why the study is unreliable in proving the possibility of sexual orientation change?