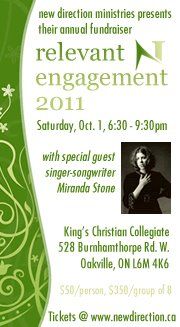 The Toronto-based ministry New Direction is controversial. As a former Exodus organization that now aspires to “bridge the gap” between Christians and LGBT people, both Christian and non-Christian, it invites suspicion from both sides.

On Saturday, I was honoured to be a guest at Relevant Engagement, New Direction’s annual fundraiser. Last year, I joined the event via livestream and later blogged about sociologist and evangelical pastor Tony Campolo’s message. This year, the format was different. There was no big-name speaker; instead, Executive Director Wendy Gritter invited a handful of people to join her in comfy armchairs on stage, and she interviewed them about how the work of New Direction had affected their lives.

After hearing those testimonies — in a room full of conservatives and liberals, gays and straights — I knew there was no doubt New Direction was doing good things for the LGBT people who came to it.

Hanan, a once-judgmental mother, bewildered and distraught when her child came out, said she had “learned to be accepting of people who are different than us.” She recalls:

At the first meeting, we were at the parents’ meeting … [and] one of the parents was introducing herself and her son, and she said … she is so grateful that the Lord has a gay child in her family. And I thought that was so odd to me at that time. But right now I’m at that point. I am thankful the Lord has put our son in our family.

Not long ago, Alison was a biological male named Bob. New Direction supported her through her transition. She isn’t a Christian and “may never end up being something anyone would recognize as a Christian, but it’s a moving journey right now, and it’s actually pretty wonderful.” As she left the stage, Wendy congratulated her: “You’re a woman of great courage.”

Sandy came out as lesbian in her twenties and became a Christian in her thirties. Believing her homosexuality was immoral and encouraged by her pastor to believe God could change her sexual orientation, she pursued change through Living Waters and went through years of denial. She became heavily involved in a Pentecostal church and eventually found her “connection to Jesus” was fizzling out, leaving her feeling “suffocated” by the burden of church and religion.

Now in her late forties, and with the support of New Direction, Sandy has returned to a liberating faith and has come to admit that “I’m just as attracted to women as I ever was, and I like guys, but it’s just not the same thing.” She has discovered that she “pushed down this really integral part of me,” and it did her a lot of damage. She is single, but after decades denying her sexuality, she is open to meeting a woman and having a relationship.

A mother learns to love and accept her gay son. A transgender woman finds support and affirmation. A lesbian puts aside denial and learns to be happy how she was created.

I didn’t need convincing that New Direction was doing good things. I’ve corresponded with Wendy for a few years and gotten to know her as a friend since I moved to Ontario a couple of years ago. I’ve never felt less than fully affirmed by Wendy in every aspect of my person, including my sexuality and my spirituality, as much as they both differ from the Christian norm. I hope others will take a look and consider what New Direction is about, however.

Watch the full video of Saturday’s Relevant Engagement 2011 below. The live interviews are at around the 1-hour mark; the broadcast also includes a talk by Wendy, some pre-recorded interviews and some amazing live music (kinda folky) by Canadian singer-songwriter Miranda Stone.

Read more about New Direction in the Ex-Gay Watch archives, or visit the official website at www.newdirection.ca.